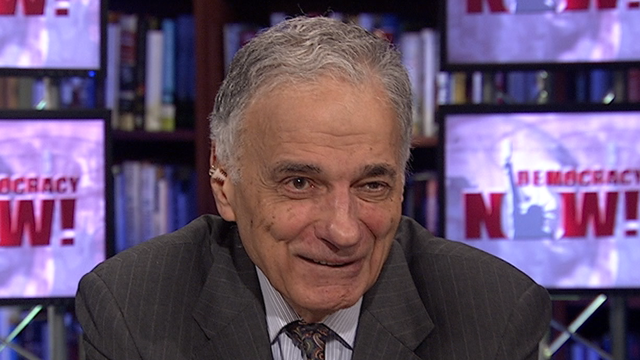 Ralph Nader, are you prepared to don a sackcloth and perform a public act of penance for your role in causing the defeat of Al Gore in the 2000 election? Who is demanding this political burning of Nader? Jonathan Chait of New York magazine who still can't get over his obsession with Gore's loss in the 2000 election. He flat out blames Ralph Nader for that loss and is now enraged that Nader won't publicly confess his role in preventing a President Gore. After all these years, Chait remains a man obsessed. It is as if he can find no final peace unless we get a confession of "guilt" from Nader.

Sixteen years have passed since Ralph Nader’s third-party candidacy diverted enough left-wing votes to make George W. Bush president. That is enough time for Nader to confess his role in enabling one of the most disastrous presidencies in American history, or at least to come up with a better explanation for his decision. Instead, Nader has repeated his same litany of evasions, most recently in an interview with Jeremy Hobson on WBUR, where he dismissed all criticisms of his 2000 campaign as “fact deprived.”

The facts of Nader’s impact are fairly clear. His candidacy helped Bush in three ways. First, by insisting Bush and Al Gore were ideological twins, “Tweedledee and Tweedledum,” he aided Bush, who was trying to mute the ideological dimensions of the election, cast himself as a successor to Clinton’s agenda, and win on personal character. Second, he forced Gore to devote resources to defending otherwise solid Democratic states. And, third, he won enough votes in Florida to put the state into recount territory, allowing Bush to prevail.

Of course, no mention by Chait of the role of Dan Rather who declared Gore the winner of Florida despite the fact that polls in the conservative Panhandle, in the Central Time Zone, had yet to close. That act alone cost George W. Bush many votes by people who decided not to cast their ballots since the state was improperly called for Gore.

Nader could defend this decision — by, say, making the case that keeping the Democrats from moving too close to the center requires throwing the occasional election to the Republicans. Instead, he persists in simply deflecting the issue away from his own behavior. Blaming his candidacy is a “politically bigoted comment,” he tells Hobson, because “They are assigning a second-class citizenship to the third party.” (Actually, they are merely recognizing the fact that third parties do not have a chance to win the election, but can impact which of the two major-party candidates does win.) Nader likewise ticks through his well-worn list of non-Nader factors that helped Bush win:

...Nader himself once cited a poll showing that only 38 percent of his supporters would have voted for Gore, against 25 percent for Bush, and the remainder staying home. Nader presented this as evidence in his own defense. But if we apply it to the results in Florida, it clinches the opposite conclusion. Ninety-seven thousand Floridians voted for Nader. By his own figures, he swung a net of more than 12,000 votes from Gore, many times larger than Bush’s margin of victory.

And for this grievous sin, the latter day Torquemada demands a confession from Nader. And the fact that he probably won't be getting it will continue to cause Chait great agony after all these years.