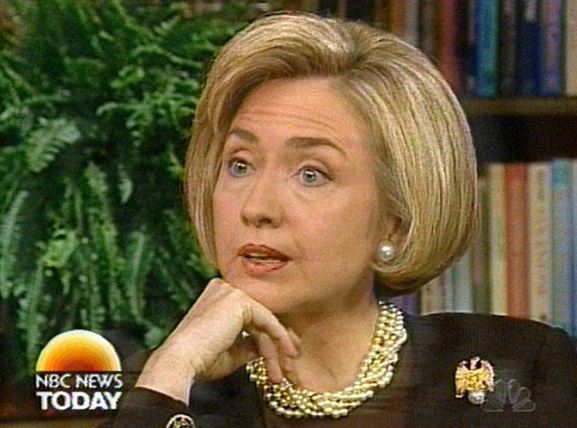 How Mandela helped Hillary get over Monica and other soap opera tales.

Or as the Washington Post writer, Lisa Bonos put it in her article, how it took a village to help Hillary Clinton move past Bill's infidelity. Namely a village chock full of Hillary's friends, political cronies, and world-wide celebrities and assorted glitterati. Bonos gushes on and on over Hillary's village in a not subtle bid to remind us all to get over it and forget about it in the campaign. So welcome to Hillary's village of enablers as presented by Bonos:

We know that Hillary Clinton believes it takes a village to raise a child. As my colleague Carlos Lozada has pointed out, 20 years since “It Takes a Village” was published in 1996, the presidential candidate still draws on that village philosophy on the campaign trail. While revisiting Clinton’s 2004 memoir “Living History” recently, I noticed that she also relied on a village of friends and political and spiritual leaders to move past her husband’s infidelity in the 1990s. Her persona as a pragmatist extends not only on health care and the economy, it seems, but also her personal relationships.

And what a village it was!

Stevie Wonder stopped by the White House to play a song he had written specifically for the first lady. “He hadn’t finished all the words,” Clinton writes, “but the song was about the power of forgiveness, with the refrain, ‘You don’t have to walk on water. … ’ ” She adds that: “This was one of the kindest gestures anyone made during this incredibly difficult period.”

Oooh! How about some media celebrities?

Katharine Graham, The Washington Post publisher “who had had her own experience with the agony of infidelity,” Clinton notes, “made a point of inviting me to lunch.”

Anna Wintour, editor of Vogue magazine, called the first lady to propose an article and photo shoot. “It was gutsy of her to offer and counterintuitive for me to accept,” Clinton writes. “In fact, the experience did wonders for my spirits. I wore a glorious burgundy velvet Oscar de la Renta creation for the cover shoot. For a day, I escaped into a world of makeup artists and haute couture. The Annie Leibovitz photographs were great, giving me the chance to look good when I had been feeling so low.”

Wow! We got the bonus celeb names of Oscar de la Renta and Annie Leibovitz tossed in! Time for world leader name.

Nelson Mandela, who at the time was president of South Africa, visited the White House after a session of the U.N. General Assembly..... When Mandela said publicly that “We have often said that our morality does not allow us to desert our friends” — and addressed Bill directly by saying “We are thinking of you in this difficult and uncertain time in your life” — Hillary viewed this as a “plea to Americans” to stop the effort to impeach the president. “If Mandela could forgive,” Clinton writes, “I would try. But it was hard, even with the help of many friends and role models.”

It is one of the great tragedies that Mother Teresa passed away before she could join in with the Village of Enablers to offer forgiveness to Hillary. However, to ameliorate her absence I give you...the Dalai Lama!

The Dalai Lama also came for a visit. He presented the first lady with a white prayer scarf and told her that he thought of her often. “He encouraged me to be strong and not give in to bitterness and anger in the face of pain and injustice,” Clinton writes.

One wonders if the Dalai Lama bumped into Charlie Rangel while bearing the sacred white prayer scarf of forgiveness:

Shortly after the 1998 election, Rep. Charlie Rangel called the first lady and urged her to run for Sen. Daniel Patrick Moynihan’s seat in the U.S. Senate. At first she thought the idea was “absurd,” she writes, before eventually changing her mind.

Why I bet the idea of running for Senate as a prelude to running for president never ever entered Hillary's mind before Rangel's suggestion. Anyway, running for political office proved to be therapeutic for Hillary:

One of the benefits of pondering a run for the Senate, Clinton writes, was that she and Bill were talking about things other than their relationship. “The tables were now turned,” she writes, “as he played for me the role I had always played for him.”

So if you find your hubby cheating on you, try political office campaign therapy. That along with a village of enablers will work wonders for your emotional health.