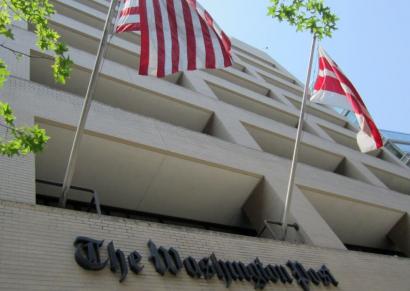 Washington Post  "energy and the environment" (Global Warming) writer, Chris Mooney, has discovered climate heresy among middle and high school teachers in the form of skepticism which he finds very upsetting. Yes, there are actually teachers who raise an eyebrow when, for example, 2016 is declared to be the warmest year on record before the year even starts. Mooney, who performed the same shtick at Mother Jones, has noted such skepticsim in his column and issues the proper condemnation of the teachers daring to not completely buy into the new Lysenkoism aka Global Warming:

A major new survey of U.S. middle school and high school science teachers has found that across the country, a majority are teaching about climate change in their classrooms — but a significant percentage are also including incorrect ideas, such as the notion that today’s warming of the globe is a “natural” process.

"Incorrect ideas" meaning politically incorrect ideas. Shame on those teachers expressing skepticism about the Global Warming dogma that reinforces itself with such efforts as "hide the decline" as was revealed during Climategate with this infamous email from a prominent climate change directors to fellow scientists invested in the cause:

I’ve just completed Mike’s Nature trick of adding in the real temps to each series for the last 20 years (ie from 1981 onwards) amd from 1961 for Keith’s to hide the decline.

The same group of emails also revealed this gem sent to Michael Mann:

Well I have my own article on where the heck is global warming ? We are asking that here in Boulder where we have broken records the past two days for the coldest days on record. We had 4 inches of snow. The high the last 2 days was below 30F and the normal is 69F, and it smashed the previous records for these days by 10F. The low was about 18F and also a record low, well below the previous record low.

Now back to Mooney's angst over skeptical teachers:

One of the most striking findings: 30 percent of teachers said in the survey that they tell students that the current warming “is likely due to natural causes” — contradicting major scientific assessments of the matter. Thirty-one percent of teachers also said that they include both the scientific consensus position — that global warming is human-caused — but then also a “natural causes” position that contradicts it, thus presenting “both sides,” in the study’s words.

GASP! The absurd idea that the sun might have a role to play on earth's temperatures is positively heretical. And presenting both sides of a theory is impermissible!

The study also found that most teachers are unaware of the strength of the scientific consensus about the human causes of climate change. The survey asked them “what proportion of climate scientists think that global warming is caused mostly by human activities?” For middle school teachers, 30 percent chose the option “81 to 100%,” which the researchers identified as the correct answer. High school teachers were only a little better, at 45 percent.

Hmmm... Any chance that question could be amended to "what proportion of climate scientists NOT receiving government grants or other such funding think that global warming is caused mostly by human activities?"

A key problem, Plutzer emphasizes, is how many teachers are presenting climate change as something to be debated in class.

Case closed! It is so decreed. Any evidence to the contrary will be instantly dismissed by the purveyors of the new Lysenkoism.