Up to 200,000 people will be attending a climate change rally on the National Mall on the same day that the Pope will be speaking to Congress. Wow! Such was the bold prediction reported by Washington Post reporters Juliet Eilperin and Michelle Boorstein on August 25. So what happened when Pope Francis did arrive at the Capitol last Thursday? Before we get to that sad reality, let us join Eilperin and Boorstein joyously prognosticating yuuuuuge numbers back in August:

Several environmental groups are planning a major climate rally that will draw hundreds of thousands to the National Mall on Sept. 24, the day Pope Francis speaks to Congress and is expected to address the public afterwards.

The permit for the gathering — which will make the moral case for reducing greenhouse gas emissions linked to global warming — is for 200,000 people. The Moral Action on Climate Network, along with the Earth Day Network, League of Conservation Voters, Sierra Club and other groups, have timed the rally on the Mall the same day of the pope’s speech. House Speaker John Boehner (R-Ohio) has said the pope “has expressed an interest” in making an appearance on the Capitol’s West Front.

Lise Van Susteren, who co-founded Interfaith Moral Action on Climate and whose group originally applied for the rally permit, said in an interview that groups from a wide array of faiths have transcended their other differences by embracing the issue of climate justice.

With all those groups attending it's guaranteed to be a success.

While details are still being worked out, the rally will last for several hours and stretch between Fourth and Seventh streets on the Mall.

A big giant, vast rally covering a large area. What could go wrong? Well, let us time travel to a month later on September 24 when the cold harsh reality of that big rally of hundreds of thousands yielded a turnout of only a few hundred as you can see in the picture below. Gone are Eilperin and Boorstein and left with the sad task of reporting on the rally is Hamil Harris with a mere 237 word article on the fizzle. Perhaps the Washington Post hopes you don't even notice: 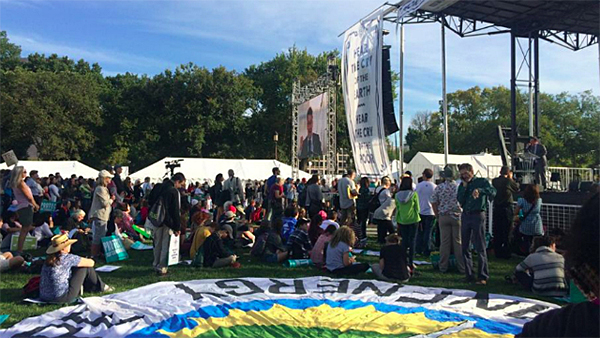 Following Pope Francis’s address to Congress Thursday, the pope stood on the balcony of the U.S. Capitol and appeared to the crowd that flowed down to the Mall, where an environmental rally had drawn a diverse group of activists, singers and religious leaders.

So how many showed up at this environmental rally where HUNDREDS OF THOUSANDS were predicted to attend? Harris avoids reporting on the numbers since it would require eliminating about three zeroes from the predicted number. An honest article would be titled, "Climate Rally Fizzled" with Eilperin and Boorstein explaining how they got it so wrong. (See update below as Eilperin did sheepishly admit the fizzle.)

UPDATE: Juliet Eilperin did write a followup story based on the fizzled numbers best described as "oops":

The faith-based climate rally that took place Thursday in Washington drew a much smaller crowd than anticipated, though organizers say they still managed to convey their message.

The Moral Action on Climate Justice network, which worked with the Earth Day Network, League of Conservation Voters, Sierra Club. Friends of of the Earth and other groups to organize the event, originally asked the National Park Service for a permit for 50,000 attendees. But Park Service countered the permit should be closer to 200,000, organizers said, given the popularity of Pope Francis.

In the end, according to several observers, the overall attendance was closer to 2,000. Think Progress — which is published by the liberal think tank Center for American Progress — estimated there were “hundreds of activists” on the Mall for the event, which started early Friday.

Um... Methinks Center for American Progress is much closer to the sad truth with an estimate of hundreds. Nothing close to hundreds of thousands predicted in August.