It was the most powerful hurricane to hit the United States. No, not Katrina whose tenth anniversary was recently widely noted. This was a much more more powerful hurricane with a much higher death toll. It was the hurricane that hit the Middle Keys of Florida 80 Labor Days ago on September 2, 1935 and since hurricanes back then had no names, it was known as the Labor Day Hurricane. There were over 400 official deaths, most of them World War I veterans working in three FERA (Federal Emergency Relief Administration) camps building the overseas highway. Most of those deaths could have been easily prevented but due to New Deal ineptitude, they met an avoidable fate in the Keys. 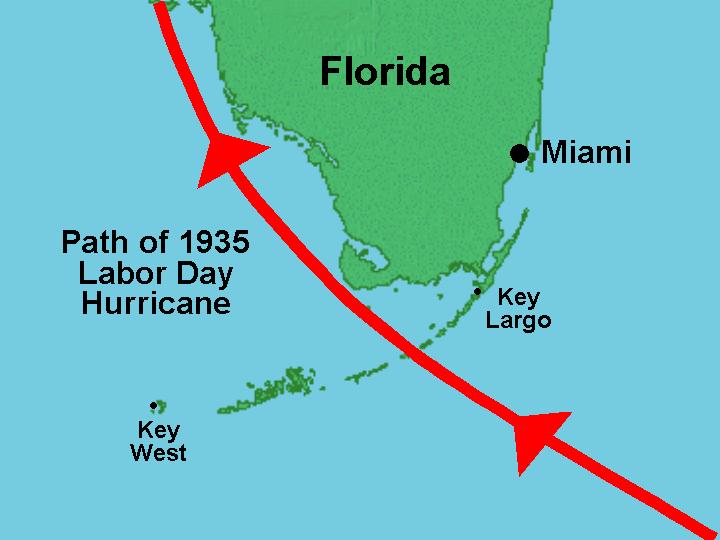 Few today have heard about this tragedy in part because the government ineptitude in question was Franklin D. Roosevelt's New Deal but less than two weeks after the Labor Day Hurricane hit, novelist Ernest Hemingway, who was living in Key West at the time, wrote an essay about it called Who Murdered the Vets? Even if you are not a fan of Hemingway's fiction, you will find his facts about this hurricane tragedy quite interesting.

WHOM did they annoy and to whom was their possible presence a political danger?

Who sent them down to the Florida Keys and left them there in hurricane months?

Who is responsible for their deaths?

The writer of this article lives a long way from Washington and would not know the answers to those questions. But he does know that wealthy people, yachtsmen, fishermen such as President Hoover and President Roosevelt, do not come to the Florida Keys in hurricane months. Hurricane months are August, September and October, and in those months you see no yachts along the Keys. You do not see them because yacht owners know there would be great danger, unescapable danger, to their property if a storm should come. For the same reason, you cannot interest any very wealthy people in fishing of the coast of Cuba in the summer when the biggest fish are there. There is a known danger to property. But veterans, especially the bonus-marching variety of veterans, are not property. They are only human beings; unsuccessful human beings, and all they have to lose is their lives. They are doing coolie labor for a top wage of $45 a month and they have been put down on the Florida Keys where they can't make trouble. It is hurricane months, sure, but if anything comes up, you can always evacuate them, can't you?

...It is not necessary to go into the deaths of the civilians and their families since they were on the Keys of their own free will; they made their living there, had property and knew the hazards involved. But the veterans had been sent there; they had no opportunity to leave, nor any protection against hurricanes; and they never had a chance for their lives.

Who sent nearly a thousand war veterans, many of them husky, hard-working and simply out of luck, but many of them close to the border of pathological cases, to live in frame shacks on the Florida Keys in hurricane months?

Why were the men not evacuated on Sunday, or, at latest, Monday morning, when it was known there was a possibility of a hurricane striking the Keys and evacuation was their only possible protection? Who advised against sending the train from Miami to evacuate the veterans until four-thirty o'clock on Monday so that it was blown off the tracks before it ever reached the lower camps?

These questions are no longer asked in part because the mistakes were made by the "wrong" government. However, if you are ever in the Florida Keys you might want to visit the 1935 Labor Day Hurricane Memorial monument in Islamorada at mile marker 81.5 directly across the from the library.