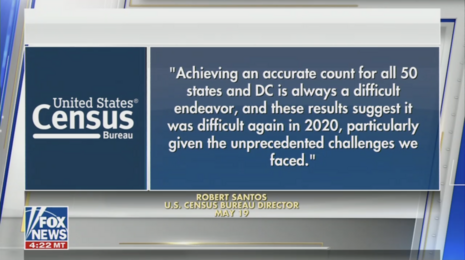 On this edition of the NewsBusters Podcast, Managing Editor Curtis Houck and I breakdown a new NewsBusters study of the media’s silence about how Census Bureau errors largely hurt red state representation. We also look at Snopes playing word games with misleading “fact checks” about lies against Florida Governor Ron DeSantis (R) and more on Brian Stelter leaving CNN.

NewsBusters’ senior research analyst Bill D’Agostino documented how only CBS News covered how mistakes by the Census Bureau resulted in red states not getting the six congressional seats they deserved, instead going to blue states. But the 34 seconds that gave it at 4:15 a.m. does not mean CBS did a good job.

Speaking of elections, Curtis highlighted how the broadcast networks think they and the Democrats have a “road map” to victory in November by being hyper-focused on abortion.

And on the disinformation front, we have purported “fact-checker” Snopes playing word games, calling a viral tweet falsely claiming to show a list of books banned in the state of Florida “satire.” They gave it that distinction despite the author making a very serious accusation that the list is real. Again, Snopes tried to be context checkers or intent checkers.