Obama Did It! Todd: 'Inappropriate' for Trump to Attack Federal Judges Hearing His Cases 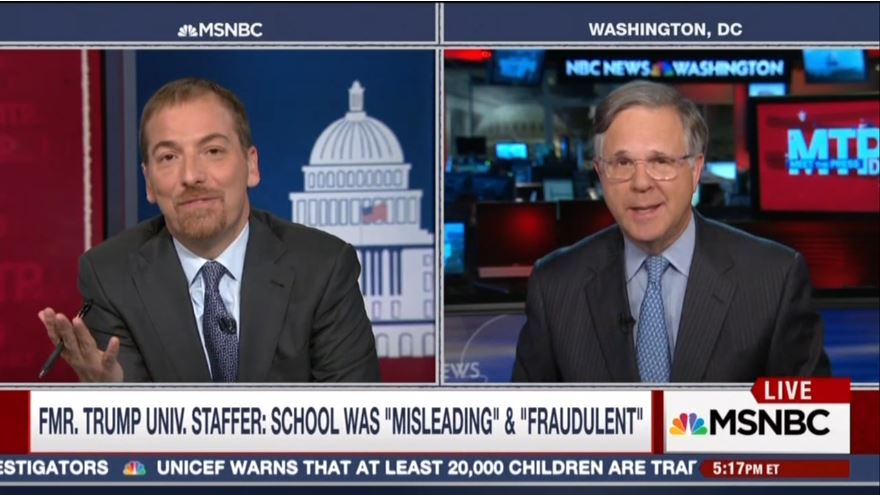 In recent days, Donald Trump has taken to actively attacking the judge who is presiding over litigation he is facing, in regards to alleged fraud at Trump University. And during Wednesday’s MTP Daily host Chuck Todd kept repeating that it would be inappropriate for a president to openly criticize the judicial branch of the federal government. It was a theme for Todd throughout the day. “If he did this while in office, it could trigger a constitutional crisis. So it is truly borderline irresponsible behavior, on that front,” he cautioned on NBC’s Today.

NBC’s Justice Correspondent Pete Williams agreed with Todd. “Lawyers, professors think that this is inappropriate because … The courts can't execute, can't carry out their own decisions. They depend on the executive branch to carry them out. That's what worries them,” argued Williams, also claiming there is no precedent for a president to criticize a federal judge hearing their cases.

Todd seemed confused that Trump surrogate Barry Bennett argued that it wasn’t inappropriate for Trump to speak out since he was a litigant in the case. “Obviously that's in the eye of the beholder there,” he retorted. Todd went on to claim that, “we couldn't find evidence of Spiro Agnew attacking judges, or evidence of Richard Nixon, go down the line.

Interesting, because President Barack Obama did just that in 2010 when he angrily rebuked the Supreme Court for their decision on Citizens United v. Federal Election Commission. The President’s heavy handed criticism came during a fiery State of the Union speech where he claimed the Justices, in a 5-4 decision, “reversed a century of law to open the floodgates for special interests — including foreign corporations — to spend without limit in our elections.” This was the State of the Union where Supreme Court Justice Samuel Alito famously mouthed the words “not true” to the President.

CHUCK TODD: It was interesting, Mr. [Barry] Bennett, the spokesperson— A representative from the Trump campaign, basically said it is inappropriate for a sitting president to do what Donald Trump's doing. Not inappropriate since Donald Trump is a litigant. Obviously that's in the eye of the beholder there. But explain to me what legal folks are saying what, other judges are saying what, what other justices are saying about what feels like an -- we couldn't find evidence of Spiro Agnew attacking judges, or evidence of Richard Nixon, go down the line.

PETE WILLIAMS: Well let’s be clear, I've not heard anything from judges or justices. What you hear a lot about is in the legal blogosphere. Lawyers, professors think that this is inappropriate because it’s – for the very reason you articulated, which is a person who wants to lead the executive branch, this is their point. They say, a person how wants to lead the executive branch criticizing the courts, criticizing a judge. The courts can't execute, can't carry out their own decisions. They depend on the executive branch to carry them out. That's what worries them.

I would say also as a matter of trial strategy, I don't know how Donald Trump's own lawyers feel about this. I would say most lawyers don't think this is a very good idea to personally criticize the judge who is handling your case. But this is a jury trial and that's where Trump is hoping he’ll win.

SAVANNAH GUTHRIE: Oh, Chuck, it's hard to follow up that, but let's talk about this Donald Trump news conference yesterday. Obviously, we know it is a no-lose proposition to blast the media, but let's not get distracted by that, let's go to the substance. Where do we net out on what happened with those donations to the veterans? And also, this issue of the Trump University documents that Hallie just talked about.

TODD: Well, I would say, to me, there were two more important take-aways than this back and forth with the media. Number one is what you brought up with the Trump University. The fact of the matter is, Donald Trump – you know why the documents are public? Because Donald Trump has done nothing but beat the living daylights out of this judge. And the more he's done that, the more the judge has basically said, “Hey, our credibility has been called into question, we’ve got to put everything out here.” So it is a reminder, is this the way he would govern? Is this how he would act in office? Any critic – any critic from the judiciary branch, another branch of government. You know, right? This is something minor in his own office. If he did this while in office, it could trigger a constitutional crisis. So it is truly borderline irresponsible behavior, on that front.