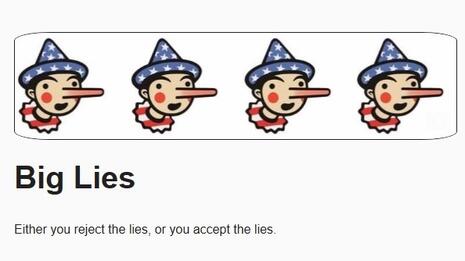 The Washington Post "Fact Checker" throws their "4 Pinocchios" (pants-on-fire) rating to President Trump quite regularly. They have also maintained an anti-Trump database that accuses Trump of more than 22,000 "false or misleading statements." Liberals often exaggerate that into "22,000 lies."

The Post never did a False/Misleading database for Obama, or Hillary Clinton, and no one expects they're going to start one for Joe Biden.

These "fact checkers" are loved by liberals, and liberals often give them their ideas of what "facts" to check, even PolitiFact's annual "Lie of the Year" award.

PolitiFact has not only tagged Trump as "Mostly False" or worse in more than 70 percent of their checks, they have shown the same aggression toward Ted Cruz, and Newt Gingrich, and Rick Santorum, and so on. By contrast, Hillary and Bernie Sanders and Obama are "Mostly True" on a routine basis.

These "checks" often seem designed to shame Republicans out of suggesting Democrats are extreme or will pass ultraliberal policies. Most recently, Tim reported that PolitiFact slapped Republican Sen. David Perdue of Georgia with a "PANTS ON FIRE" for calling his Democrat opponent Jon Ossoff a socialist.

We at NewsBusters wish you a Happy Thanksgiving, and hope you can enjoy this podcast below or wherever you listen to podcasts.