Media Research Center President Brent Bozell on Wednesday appeared on Fox Business to decry the unrelentingly negative coverage Donald Trump has endured in the first four months of 2018. According to a new MRC study, 90 percent of the President’s network press has been hostile. (The same result was found through all of 2017.) Bozell hammered: “They simply are not going to say anything positive about him.... They have no vested interest in objectivity.”

Regarding CNN attacking Melania Trump as not “culturally American,” the MRC President hit back: “It is vindictive and it’s ugly.” He wondered: “These are the same people who also lecture on a daily basis about how conservatives are responsible for hatred?”

CHARLES PAYNE: Now, this: President Trump tweeting about the negative media coverage. Quote: the fake news is working overtime. Just reported that despite the tremendous success we are having with the economy and all things else, 91 percent of the network news about me is negative quote, fake.” Why do we work so hard in, working with the media when it is corrupt? Take away credentials,” question mark? Joining us now Media Research Center President Brent Bozell. Brent, the numbers get more astounding as we go on. Ninety one percent is just absolutely astonishing. 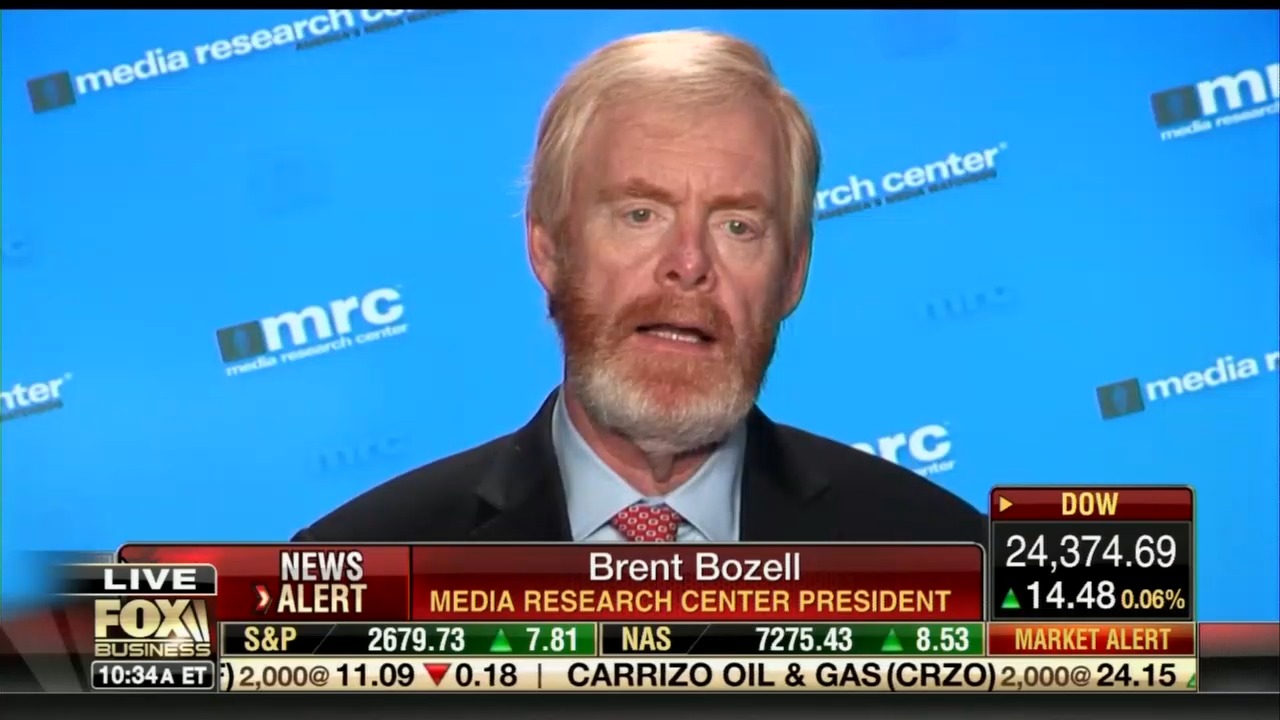 BRENT BOZELL: Yeah. Charles this has been going on since 2016. I think, I don't think I have ever seen anything like this. Not just that it is almost 100 percent negative coverage, but that it won't stop. This has been going on every single time we measured it, month by month, quarter by quarter. I think the best month he got was during his honeymoon when it went to 85 percent negative. I'm not kidding you there, I am not kidding you. They are vested in seeing him fail. He has said so and the evidence is there. Look, during this time period the first breakthrough in the cold war with North Korea in 60 years. That didn't generate anything. You’ve have had a strong economy. That didn't generate anything. You’ve hd a strong jobs report as a result of his tax cuts, that didn't generate anything. You’ve got the overreach of 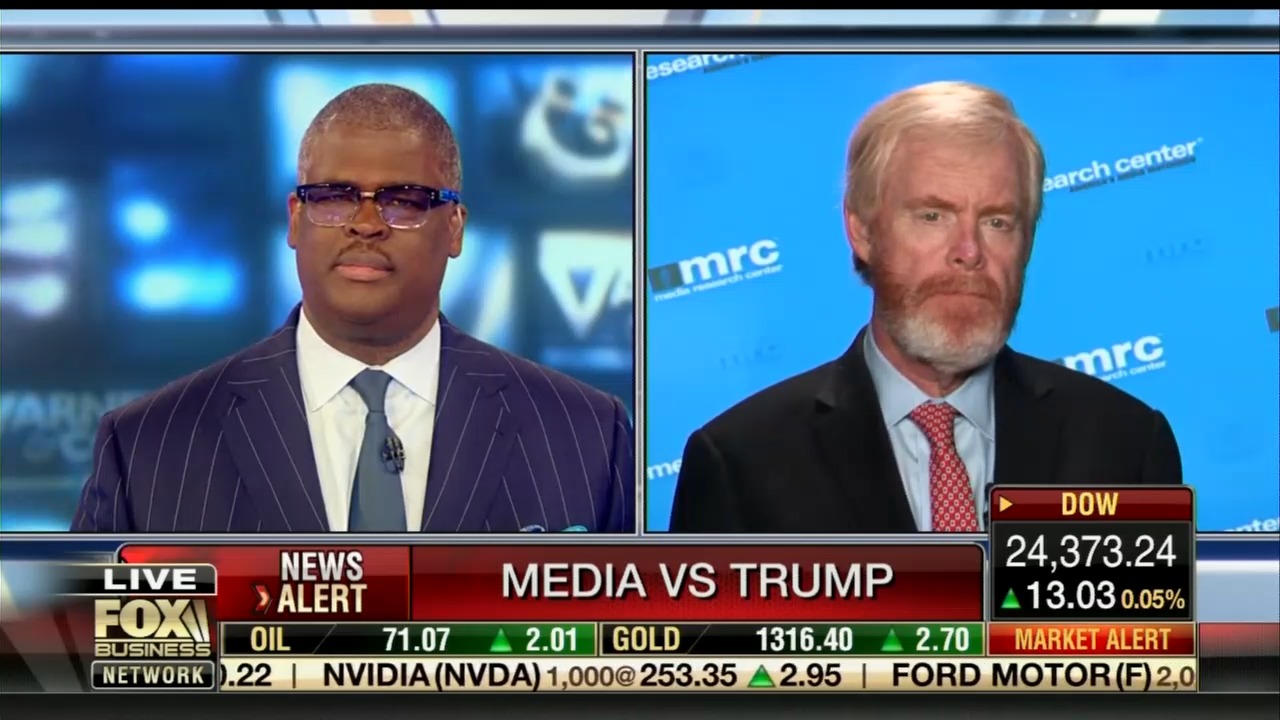 Mueller. Look at a judge just two days ago blasting that investigation.

That garnered, believe it or not, that garnered a grand total of combined for CBS, NBC, 30 seconds. They simply are not going to say anything positive about him. I say the last thing. I find it very interesting, and I think it would be a whole lot of fun, if he were to follow through on that tweet and start banning these people from covering the White House because they have no vested interest in objectivity.

PAYNE: I have to tell you, the assaults that I have seen on Sarah Sanders is remarkable. I want to ask you another one, before I do, have you ever seen the media to work so hard, to find or pontificate of potential negatives of good news? In other words, if the economy is great, maybe it is going to spark inflation. If we do this, maybe that will happen. What would normally be great news, they work very hard to try to find what could be the negative counterfactual.

BOZELL: I like you saying that, Charles, because it is so true. Go over to CNN look at chyron at the bottom of their stories. I burst out laughing when I see these things. Just the other day I saw the headline said, “source” colon. It’s always source colon. “Macron, French President, disappointed with talks with Trump.” No kidding, Sherlock. He came here to try to talk him out of canceling Iran deal. Of course he’s disappointed. Doesn't mean anything went wrong. So were other people were disappointed they couldn't move him. There is nothing wrong with that. But somehow source, colon, there was a problem.

PAYNE: Hey, I got another one for you. Listen to what CNN’s April Ryan said about First Lady Melania Trump.

APRIL RYAN: This is a First Lady who is not culturally American but she is learning the ways, and this is not just an American issue. These are not just American issues.

BOZELL: You know, you always say put a Democrat in that position and see what would happen. I find it curious that ABC has been running on national news stories about Melania Trump isn't living in the White House. The White House is laughing about this story. Everybody, nobody on this set is going to say that they're surprised about all a the talk about the separation of Bill Clinton and Hillary Clinton over a number of years where they don't seem to be together.

News media would never touch that story. Yet, ABC is all over a story that somehow the First Lady is not in the White House.

PAYNE: But even on this thing culturally. The same folks that promote open borders, that promote, supposedly promote, all the different types of ethnicities and religions in our country, the mosaic of America, to question her Americanism seems so farfetched and hypocritical it is beyond the pale.

BOZELL: It is but it’s also personal. It is vindictive and it’s ugly. Don't you find it a little bit interesting, Charles, these are the same people who also lecture on a daily basis about how conservatives are responsible for hatred?

PAYNE: If that isn't hatred of Donald Trump, it would extend to his wife. Anyone who knows her will tell you she's a class act. You may not like Donald Trump. That's fine, but to extend it to his wife? Once upon a time we said that was off bounds.

BOZELL: Thanks for having me