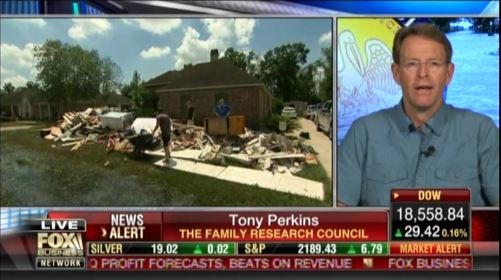 Along with the fact that Family Research Council President Tony Perkins and his family had their cars and home completely flooded as part of Louisiana’s devastating floods, Perkins has recently been inundated by sites across the liberal media’s spectrum twisting his words on how and why natural disasters transpire.

The Huffington Post was joined by others such as The Guardian and even Religion News Service in wildly speculating that Perkins suggested that natural disasters like hurricanes have occurred as punishment from God for homosexuality.

Not surprisingly, many of these attacks on Perkins never actually included quotes from Perkins and instead relied on rumors or supposed paraphrasing without inquiring about a response.

The following is a statement from Perkins to the horrendous attacks leveled against him in this trying time by the liberal media.

“Deceptive claims are being circulated on the internet that put words in my mouth about God’s role in natural disasters and what causes them.  Those claims are inaccurate.  What I have said, which I repeated yesterday in a sermon at Greenwell Springs Baptist Church, is that I don’t know what was behind this flood or any other natural disaster. However, as a follower of Jesus Christ, I believe the Bible which makes clear that God is sovereign over the elements of nature and can and does use them for His purposes.

“He also allows those same elements to be used as a means of testing our faith and devotion to Him. Is this a test of our faith or a chastisement from God?   I don’t have that answer.  Regardless of what’s behind natural disasters, our response should be the same – we are to be on our faces before God, giving thanks in everything, and placing ourselves in total dependence on Him. We know that in walking in obedience to Him, God will never leave nor forsake those who search for Him and walk with Him. As we cry out to God, we must also reach out to our fellow citizens who are hurting and need help.  We can do this with hope and confidence because God’s Word also tells us that ‘in all things God works for the good of those who love Him, who have been called according to His purpose.’

“The flood has brought together this community as never before as we are learning to depend more on each other and on God. We are thankful for the volunteers and resources that are beginning to arrive from across the country which are so vital to the relief effort as we look toward rebuilding.  We are very grateful for Samaritan’s Purse which arrived at our church within 48 hours of my call for assistance to begin helping the members of this community.  Please join us in prayer that God would use the Church to minister to this community in a powerful way,” concluded Perkins.