It was a case of checking your Twitter time stamp, but in the midst of the Harvey Weinstein scandal, daytime talk show host Ellen DeGeneres wished singer and bigtime Hillary Clinton supporter Katy Perry a happy birthday by tweeting out a photo of Ellen gawking at Perry’s ample chest, writing “It’s time to bring out the big balloons!" 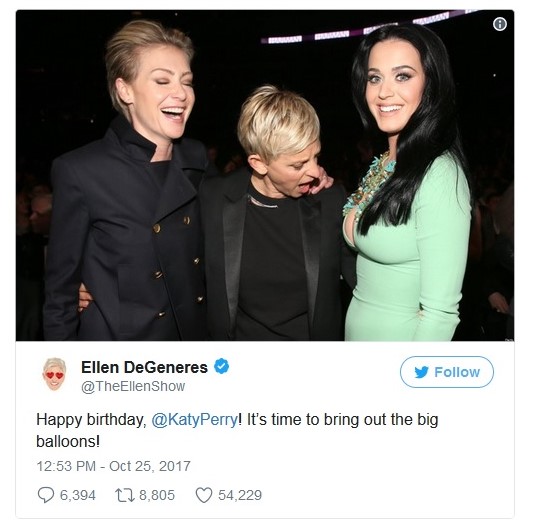 Well that’s awkward, given all the scandal and accusations of rape, sexual harassment, objectification of women Weinstein is accused of, in addition to all those Hollywood elites who KNEW about Weinstein yet remained silent on the matter. Oh, and yeah - they call themselves feminists, too.

Apparently, Ellen thinks it’s okay to objectify women because she herself, is a woman…but she’s a lesbian, so that doesn’t count – or does it? Wouldn’t her little Katy Perry birthday stunt be considered as objectifying another woman based on her looks? Isn’t this same thing Ellen and many other liberals laud against the very men who commit these same indecent acts? On Twitter, former CNN host Piers Morgan shot back: "If a man made this joke, Ellen would lead the cries of ‘SEXIST PIG!’"

This may not seem like such a big deal, but, as Amanda Prestigiacomo writes in The Daily Wire, many others have been called out for much, much less:

My goodness, actor Ryan Gosling was accused of sexism for thanking his wife Eva Mendes at the Golden Globes. Sports reporter Clay Travis was blasted as sexist for uttering the word "boobs," an apparent tagline of his, in the presence of female CNN reporter Brooke Baldwin. Actress Ashley Judd accused a poor airport worker of "everyday sexism" for calling her sweetheart…But what Ellen did? No problem.

Amanda suggested it was "lesbian privilege." So where are all the Hollywood feminists that slapped a #MeToo on their Twitter and Facebook pages and (rightly so) called for the heads of Weinstein and every other man guilty of committing any sort of harassment against women?

Nowhere. These same women would rather bark that former president George H. W. Bush, who is 93 years old, suffered several strokes and has been confined to a wheelchair for the past five years, is “harassing” women because his arm happens to fall on the lower waist of people with whom he takes pictures with and tries to lighten the situation by telling a corny joke.

So, if people want to plead that what Ellen did to Perry was an “innocent” joke, then why not give former president Bush the same leniency? (That’s a rheutorical question – we all know it’s because one is a Republican and one is a Democrat.)

In reality, the only boobs that appear to be on full display are those giving Ellen a pass while trying to stick it to former President George H.W. Bush. Maybe people should gawk over that.