Talk about betraying a bias. A reporter from the Washington Post actually admitted that she and her cohorts had “a little bit of fun” assembling and highlighting examples of foreign leaders who have mocked President Trump.

Anne Gearan is the reporter who cheerfully wrote a story last week titled, “Trump said foreign leaders wouldn’t laugh at the U.S. Now they’re laughing at him.” Gearan sounds like a character straight out of the movie Mean Girls. She told MSNBC’s Brian Williams:

BRIAN WILLIAMS [after a laugh] Back with me is national politics correspondent Anne Gearan with The Washington Post, who shares a byline on this piece. Anne, I was also reminded it got physical at NATO, with what we love to call the Montenegro Heisman, as the president [laughing] was trying to get out front near the cameras. How bad is this? And speaking of the [pro-Trump] base, I am guessing if we call the base 36, 38 percent, they're not losing a whole heck of a lot of sleep over this.

ANNE GEARAN: Yeah, certainly not the people I heard from today. Lots of people, Trump supporters were upset by this article. But my colleague David Nakamura and I were having a little bit of fun, kinda going through some of the recent examples of world leaders who either feel free to mock Trump in public or behind, as with the Australian prime minister, behind what he thought were closed doors. It's a rather remarkable spectacle.

Like, OMG! That sounds like so much fun! Let’s disrespect the man in the Oval Office! Gearan echoes the old executive editor of the Post, Ben Bradlee, who was quoted when Ronald Reagan's Iran-Contra scandal broke that he "hasn't had this much fun since Watergate."

Of course, the reporters at the Post would never dare do such a thing when Obama was in office. He was too cool, palling around with Jay-Z and Queen Bae and doing late-night shows and bowing to our enemies. This is the paper whose Christmas front page in 2008 gushed "The sun glinted off his chiseled pectorals sculpted during four weightlifting sessions each week..."

Gearan notes that while Trump declared the withdraw from the Paris Climate Accord wouldn’t be “laughing at us,” Trump, she says, has “been the butt of jokes in capitals around the world.” Most notably, she picked up on Australian Prime Minister Malcolm Turnbull, who was recently was caught making fun in a leaked recording:

“The Donald and I, we are winning and winning in the polls,” Turnbull reportedly said while mocking Trump. “Not the fake polls. They’re the ones we’re not winning in. We’re winning in the real polls. You know, the online polls.”

Who knows. Maybe Turnbull was still miffed over the phone call he had with Trump and the “dumb deal” Obama signed with accepting refugees from Australia. 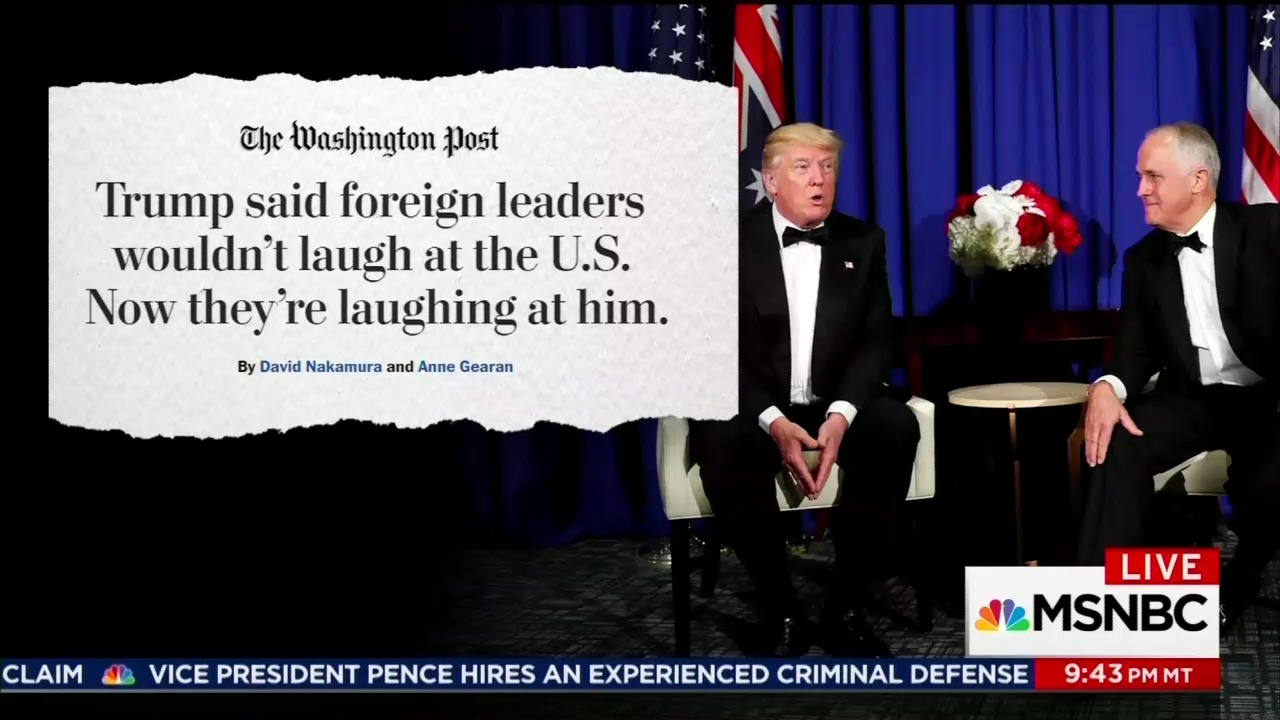 The Post piece also pointed out that Swedish Deputy Prime Minister Isabella Lovi, Norway Prime Minister Erna Solberg, France’s President Emmanuel Macron and former Mexican President Vicente Fox have also taken shots at Trump. They’re probably still in shock America is withdrawing from the Paris Climate Accord, and with that goes the HUGE contribution the United States made. Vicente Fox is still mad because he doesn’t want that wall to go up.

MSNBC showed Fox mocking how Mexicans could defeat Trump's $25 million wall with a $25 ladder. Williams proclaimed "Anne, this has turned these foreign leaders, current and former, into good first-rate comedians. In our closing 30 seconds, is there anything wrong with it?" Gearan replied this could be serious.

"I mean there's no problem with Vicente Fox having fun on a Twitter video, even if half a million people look at it," she said. "The problem long-term is if Trump is seen internationally as someone that other countries don't take seriously. Or if his reaction is so thin-skinned that he causes himself greater problems down the road. I mean, everybody really needs to be able to take a joke."

If making Trump seem like a joke is a problem, the American media is a major part of the problem.

The Post is notorious for its anti-Trump stance and messaging in the news it churns out on a daily basis.  As Breitbart's Tony Lee pointed out, when the Post leaked information last month falsely claiming Trump passed along classified information to the Russians, their “fact-checker” Glenn Kessler tweeted, “Applause in the newsroom as the Russia-leak scoop breaks the Hollywood Access [sic] record for most readers per SECOND.”

The examples showing the bias against President Trump from the Washington Post alone are countless, let alone the rest of the media that bashes him daily. At the end of the day, it seems the media are the ones taking a hit in their reputation, a sort of backfire they self-inflicted themselves. How ironic.