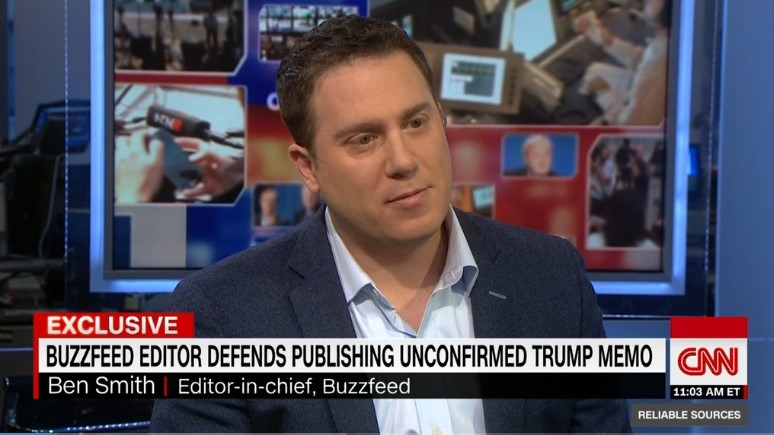 BuzzFeed editor-in-chief Ben Smith appeared on the CNN podcast “The Axe Files” to proclaim that President Trump’s attacks on the media had “breathed new life” into them, and “singlehandedly like restored -- postponed the collapse of a fair share of the legacy media in an interesting way.”

Smith is just the latest liberal to insincerely praise Trump for reviving a dormant media elite – without admitting they were asleep under Obama. “The Axe Files” is a podcast from CNN and the University of Chicago and hosted by David Axelrod, a former senior advisor and campaign manager for Obama.

Smith told Axelrod that Trump used Twitter to “program” his TV news coverage in the primaries. He "used the strength of his voice on social media to kind of bully a kind of somewhat desperate, declining legacy media" during the campaign. "Things like the evening news, which felt like they were on a long, slow, kind of genteel decline. The President of the United States is freaking out about them every day. And that's pretty energizing."

President Trump even called BuzzFeed a “failing pile of garbage” when it published a 35-page dossier on Trump that included wild allegations about sexual indiscretions with prostitutes in Russia.

Regarding the Russian dossier – from what CNN called “a respected former intelligence official” – Smith told Axelrod that they wanted to be transparent with readers given a news atmosphere of fake news, rumors, facts and “alternative” facts.

"Our audiences are swimming in all kinds of information…I think there's this impulse to be the gatekeeper," Smith said, "but you're standing there at the gate and there's just water flowing past on both sides."

Smith went on to say that he doesn’t consider BuzzFeed a “gatekeeper” per se, but as “kind of a guide through that crazy, in some ways very polluted mess.” Are they a guide, or are they the mess? (And let’s not forget those fun little quizzes and listicles they also pride themselves on! As in “Here Are 42 Of The All-Time Best Chandler Bing One-Liners.”)

These are interesting comments considering it seems the media are suddenly all about “accountability journalism” because of their obvious hatred for Trump. This certainly wasn’t the case during the Obama administration when the media were often nowhere to be found.