Once upon a time, it was commonplace for jokes of all stripes to arise whenever Anthony Weiner found himself caught up in another sexting scandal – much to the embarrassment of his wife and Hillary Clinton top aide, Huma Abedin. However, since Abedin finally left her cheating husband, people seem to be much more sensitive to them, including liberal Senator Al Franken (Minn.).

Al Franken — a former SNL comedian turned liberal New York Senator – went back to his comedic roots (albeit briefly) when he was asked last week for his reaction to Minnesota Vikings quarterback Teddy Bridgewater‘s devastating knee injury, which will sideline him for the entire season.

According to New York Times reporter Mark Leibovich, Franken quipped: “It’s like finding out Hillary's having an affair with Anthony Weiner.”

Franken must have had a change in heart because only an hour later, he tweeted: 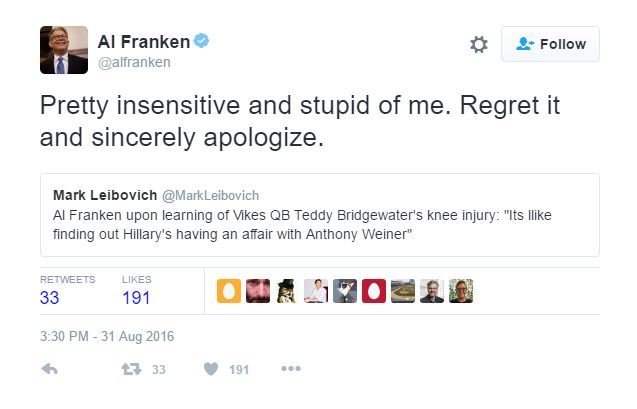 What’s actually funny is Franken would apologize about that joke but not when he made a series of lame Andy Rooney-as-rapist jokes back in 1999 when he said: "'I give the pills to Lesley Stahl. Then when Lesley's passed out, I take her to the closet and rape her.”

Abedin, apparently having enough of sticking with a constantly cheating husband, decided to separate from the disgraced former congressman when it was reported he (once again) texted a lewd picture of himself to another woman with his young son lying beside him.

This sexting scandal is nothing new to Weiner or Abedin. It was only in 2011 when Weiner resigned from the U.S. House in 2011 when it was revealed that he sent sexually explicit photographs of himself to another woman via Twitter. In 2013, Weiner made an attempt at a political comeback in the New York City mayoral race, only to see his chances of winning plummet because of another sexting scandal.