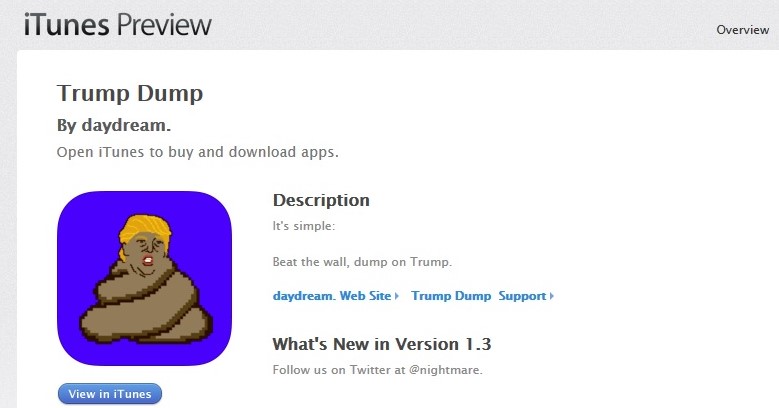 Well, here’s a liberal tilt.  Charlie Nash at Breitbart reports that after months and months of making a profit at the expense of Republican nominee Donald Trump, Apple is refusing to publish a political satire game about Hillary Clinton’s email scandal.

It’s okay that Apple publishes games that make fun of Trump by featuring him as a giant turd in the game “Trump Dump,” or “Dump on Trump Bird” or “Dump on Trump Twisty Wheel Edition” that allows a player to hit Trump with excrement. One game lets you punch Trump in the face. (Imagine the feminist reaction to these games with Hillary.)  But Apple has a BIG problem publishing anything that dare criticizes Clinton, even just scandal mockery.

The game Apple refused, “Capitol HillAwry,” was invented by Denver-based Base 10 Games and describes itself as “a political satirical game where the objective is to collect as much money through email donations as possible while maintaining a decent approval rating in the polls. Once you have booted up your server you will begin to receive various emails and spam. It is your objective to delete any confidential information off of the server by swiping the emails to the right. Removing confidential emails will improve your poll rating. You will also receive political donor emails, which will help earn you money. Be sure to swipe those to the left to respond. The more donations you take, the more your poll rating will go down and if you do nothing with the emails, they will eventually expire and have consequences.”

Apparently Apple thinks “Capitol HillAwry” is too “offensive: and “objectionable” because it makes fun of Clinton’s email. Nash reports when the developers pressed as to why their app wasn’t accepted, they were contacted by an Apple representative via email:

“Your app contains content that is offensive and would be considered objectionable by many users, which is not allowed on the App Store.” Somehow the "Trump Dump" people never got this memo. Apple responded last September when the Clinton-game developers attempted to submit the game for the first time. “Please remove all offensive and objectionable content from your app.”

Not satisfied with that response and citing Apple’s own satire policy which states that professional political satirists and humorists are generally exempt from this requirement,” the developers were then asked to call the Apple representative. John Matze – the developer of the app, claimed:

“The phone conversation was very tense. She said that if I could find a “professional satire writer” to claim they wrote the content of the application, it could go on the store…I found David Ross, a local conservative satire writer in San Diego… to edit my content and talk to Apple as she requested. That is why I have a second submission to Apple in 2016. With his resume and contact information attached, and me following all of Apple’s rules outlined by 14.2 in their documentation, they still denied the application and completely ignored his credentials as a satire writer.”

Apple responded by citing “mean-spirited content” for the reason the app wasn’t approved, but given their approval for the kind of disgusting and vile anti-Trump apps on their site, this argument is baseless.

Hmm…it kind of makes you wonder who the big wigs at Apple is backing this election. Heck, if I were the developer, I’d resubmit the app as an updated edition – one that included a NEW email scandal featuring “Russian spies” running around hacking DNC emails and throwing around code words such as “taco bowl” and “foreign-born supermodel wife.”  Just kidding, of course.