It's a shock: "Playing in the sport that most closely aligns itself with religion, in which God and country are both industry and packaging, in which the pregame flyover blends with the postgame prayer, Foster does not believe in God."

In the interview, Foster revealed that he didn’t believe in divine power – something you don’t hear much from players in the NFL.  In fact, his own brother calls him the “anti-Tebow.” Unlike how the media treated Tebow, this article went soft on a non-Christian.  In fact, it made it seem as though “coming out” as a non-believer was as big a challenge as coming out as a gay football player. A passage from ESPN’s magazine article reads: 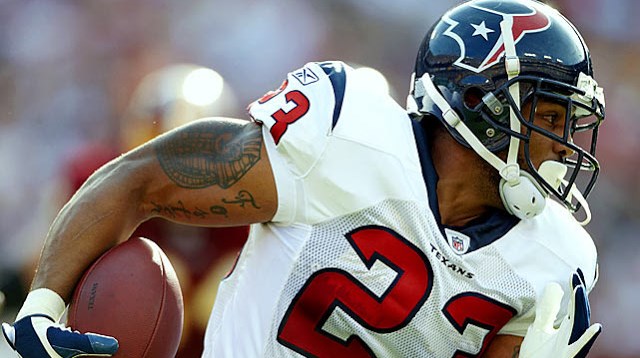 So what does football look and sound like to the nonbeliever? Foster sits at his locker before every game, facing the wall, the music in his headphones internalizing his preparation. At some point before the Texans come together to take the field, he can feel the men behind him congregating to form a circle.

There is no tap on the shoulder or invitation to join. Through the headphones he can hear the low murmur of a teammate asking Jesus to keep them safe from harm, and afterward the collective hum of the group reciting the Lord's Prayer. Before the game, he nods along to the ubiquitous God-bless-yous that register as white noise to everyone but him, and afterward he hears the postgame shoutouts to God, a standard reflex in most interviews with the triumphant.

That’s great and all, but is this really newsworthy?  After all, Tim Tebow came out as a Christian and the media excoriated and mocked him.

The article goes on to describe Foster’s Muslim upbringing, “coming out” to his father, his search for “the truth” by reading both the Quran and Bible, and how he often gets categorized as a devil worshiper by ignorant people.

ESPN turns to former Minnesota Vikings punter Chris Kluwe for “cheerfully agnostic” elaboration: “Religion plays a big role in the NFL, but I think it's a structural role. It's like white-male privilege; it's hard to see the role it plays if your entire life has been lived within that structure. If you're a religious guy in the NFL, you don't see the problem. You're the one in it. “

Moved by the testimonials of celebrity atheists like comedian Bill Maher and magicians Penn and Teller, Foster has joined a national campaign by the nonprofit group Openly Secular, which plans to use his story to increase awareness and acceptance of nonbelievers, especially in sports.

We’re told “he language of the unburdening, of the coming-out, is telling. The politicization of religion, and the religionization of politics, has created a feeling of marginalization among those who don't believe.” Todd Stiefel, chair of the group, said, “He is the first active professional athlete, let alone star, to ever stand up in support of gaining respect for secular Americans."

How nice.  If only the media treated Tim Tebow and any other vocal Christian with the same kindness and tolerance as they do non-Christians.