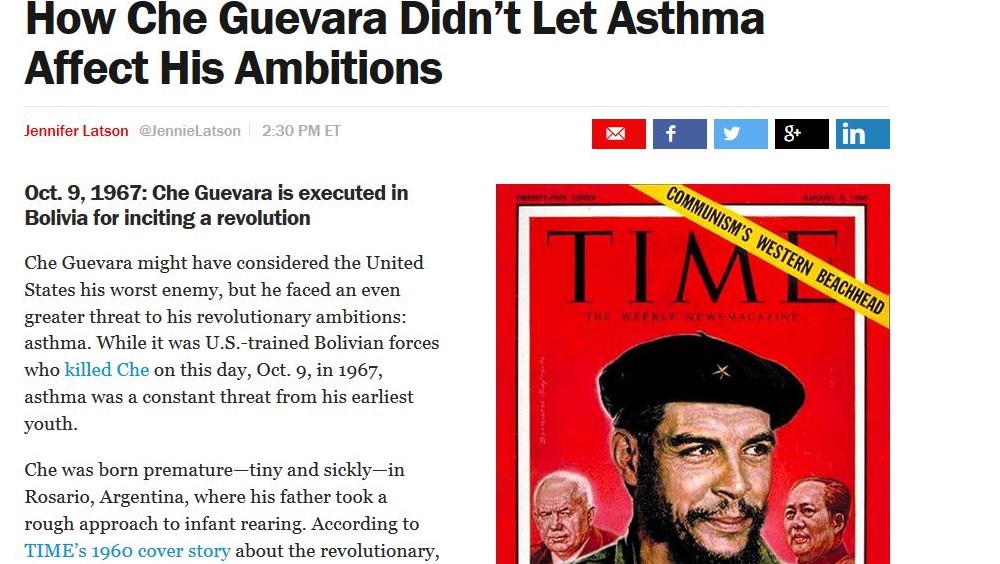 Jennifer Latson paid tribute to communist thug Che Guevara on the anniversary of his death in a gushing Friday item on Time magazine's website. Latson marveled how the Argentinian radical "might have considered the United States his worst enemy, but he faced an even greater threat to his revolutionary ambitions: asthma." The writer later touted that "asthma didn't keep him from embracing the rowdiness of youth," and that "it didn't prevent him from following a rugged revolutionary road to Cuba."

Latson led her article, titled "How Che Guevara Didn't Let Asthma Affect His Ambitions," with her "even greater threat to his revolutionary ambitions" line about the leftist's asthma, and noted that "asthma was a constant threat from his earliest youth." She continued with an account of the physical abuse that Guevara's father inflicted on his "tiny and sickly" son when he was a child, which "instead of toughening him up...left him with a persistent cough and severe asthma."

The Time journalist also pointed out that the communist's "approach to his own health was no gentler; asthma didn't keep him from embracing the rowdiness of youth...[Guevara] 'played amateur rugby at top speed, wheezing to the sidelines from time to time for whiffs from the inevitable atomizer.'"

After briefly noting that the asthma "sometimes slowed him down along the way" (and cited a 1953 incident that triggered a "terrifying asthma attack that lasted two full hours"), Latson outlined that the communist "did little to ward off future asthma attacks, with a lifestyle that involved regular raging—and chain-smoking cigars. If anything, his own affliction seemed to be an afterthought. Although he earned a medical degree before embarking on his Communist crusades, he didn't focus on respiratory ailments."

Near the end of her article, the writer noted that "if his fragile health made Che an unlikely guerilla leader, it wasn't the only unlikely role he threw himself into. He was an equally ill-suited financier—but that didn't stop him from becoming the head of Cuba's central bank." She also included one more anecdote of the lengths that Guevara had to go through to fight his asthma: "Even diehard Communists sometimes had to make sacrifices to stay alive, however. Che's mother, in a 1961 interview, told reporters, "...[A] Soviet doctor...prescribed some pills for his asthma that are doing him lots of good.' She added, 'These pills, of course, are made in the U.S.'"

Back in March 2015, Latson boosted the supposed "truth" of a claim that another hero of the far left, Ethel Rosenberg, "had not actively taken part in espionage....Her brother, David Greenglass, admitted in a 2001 interview that he had lied to protect himself." She also spotlighted how "some historians have argued that the value of the classified information itself may have been exaggerated during the trial." However, she didn't mention something that former leftist pointed out in a September 30, 2015 item in the Wall Street Journal – that "revelations over the past 20 years—the Venona decrypts of KGB transmissions to its American agents in the 1940s, and KGB files released by a Russian defector who now lives in Britain, Alexander Vassiliev—showed concretely Ethel's involvement in her husband's espionage ring."