Many people living in this current century – especially during the COVID-19 pandemic and the stay-at-home orders that resulted – have shopped online at Amazon. They've become enormous. 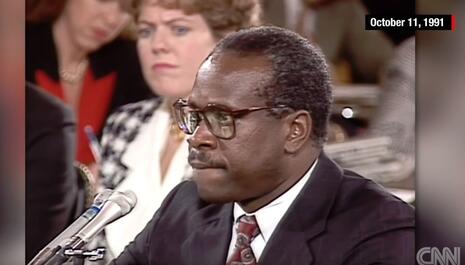 The company is also very progressive – having posted corporate grandstanding for Black Lives Matter on social media as a result of the death of George Floyd. The posts had Amazon show their true colors, and they also show the company’s hypocrisy. They recently decided to remove a PBS documentary about Clarence Thomas, the black conservative serving on the U.S. Supreme Court since being appointed by president George H.W. Bush in 1991 – just in time for Black History Month. According to Breitbart:

Justice Thomas’s incredible story is one that every American should know – and in particular, every black American.  He was born in 1948 in deep poverty in the Deep South of segregated Georgia, living from birth under Jim Crow laws. His parents had almost no education, and his father left the family before he was two. Thomas’s life changed when he was 7 years old, when he and his younger brother went to live with his grandparents.

Amazon Prime is offering four films (two docudramas and two documentaries) on Supreme Court Justice Thurgood Marshall, a liberal icon and our nation’s first black Supreme Court justice.  There are even two films (one docudrama and one documentary) on Anita Hill, who made unproven allegations of sexual harassment against Thomas in an attempt to doom his confirmation.

So, apparently the only black lives that matter to Amazon are the lives of progressives. And the fact that they wouldn’t even show a documentary about a black Supreme Court justice just because he’s a conservative proves the company to be nothing but hypocrites and liars.

Here’s some proof. In November of last year, NewsBusters writer Lindsay Kornick wrote about an Amazon-produced anthology series done alongside the BBC called Small Axe, direced by notorious race-baiter Steve McQueen (who also directed 12 Years a Slave). It’s supposed to be a historical series, but is nothing but propaganda that creates race problems that don’t exist Kornick concluded her review of the series with this:

If the series creator himself believes 1970 London is comparable to America today, it’s no stretch to see reviews make the same connection.

There are still four more films left in the Small Axe series which probably means four more weeks of people making “timely” connections, as if the current BLM movement hasn’t dragged on long enough for viewers.

I couldn’t have said it better myself. As a corporation, Amazon has the right to do whatever it wants. But  when their Black Lives Matter activism proves them to be hypocrites and liars (to paraphrase North Carolina’s first black Lieutenant Governor, Mark Robinson) that should have people concerned. There is no excuse for pretending Clarence Thomas is not a historic figure during Black History Month.

Amazon has proven themselves to be a completely partisan corporation. Its founder, Jeff Bezos, has shown his left-wing colors as well, especially due to the fact that his newspaper – The Washington Post – has become filled with nothing but leftist insanity ever since he bought the paper from the Graham family.

The complete and total alienation of conservatives from the tech and entertainment industries is out of control.