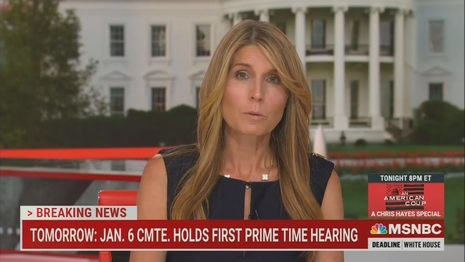 Nicolle Wallace is a disgrace.

I went through the transcript of her MSNBC show yesterday multiple times. Surely, there must be something there! It beggars the imagination that a TV show devoted to political news could have failed to cover a story that broke earlier that same day--the arrest of an armed man outside the house of Supreme Court Justice Brett Kavanaugh, and who admitted that his plan was to assassinate him.

But yes, as incredible as it seems, Nicolle Wallace failed to devote any time--not one second--to that story during her two hours of MSNBC airtime on yesterday's Deadline: White House.

Not only does Wallace lack journalistic integrity, she is apparently devoid of a sense of irony. While burying the attempted Kavanaugh assassination, Wallace aired two different people expressing outrage, a word that Wallace herself repeated, that Fox News won't be providing wall-to-wall live coverage of the Pelosi-panel hearings today (although Fox Business will go live).

The first clip that Wallace aired criticizing Fox News was from an interview earlier in the day in which Michael Fanone, a Metropolitan Police officer, expressed "outrage" that "some networks" aren't providing live coverage of the hearings. Later, MSNBC contributor Cornell Belcher made it explicit: "let's call it -- I mean, I think it's Fox." Wallace agreed: "right."

Belcher called Fox News' decision not to provide live coverage of the J6 hearings "mind-boggling." What would he call Wallace's decision—on the very show in which he participated—to black out coverage of the attempted assassination of Justice Kavanaugh?

If a man had been arrested outside the home of one of the liberal Justices under similar circumstances, do you think Wallace might have found time to discuss it? Rhetorical question. Not to mention if, God forbid, something similar had happened with Ruth Bader Ginsburg. Wallace would have given it a four-hour, sirens-blaring, Special Report!

Other MSNBC hosts at least brushed past it briefly -- Ari Melber, Joy Reid, and Stephanie Ruhle did. On a special two-hour All In, Claire McCaskill mentioned Kavanaugh, but only about refusing to vote for him. Morning Joe reported on it this morning.

On her MSNBC show, Nicolle Wallace blacking out the story from earlier that same day of the arrest of an armed man who wanted to assassinate Supreme Court Justice Brett Kavanaugh was sponsored in part by Safelite, Panera, T-Mobile, Intel, Dell, Amazon, and Hyundai.

MICHAEL FANONE: I mean, I'm happy to hear that they're having public hearings, but I'm disappointed -- well, really, I'm outraged, to hear that some networks are declining to air the hearings, just as they did when I testified last year. You know, it's an opportunity for Americans to decide for themselves, to listen to the committee's findings, but most importantly to listen to the witnesses. I don't want to say I have no hope, but I think that the people that need to see the reality of that day are not going to be exposed to it.

NICOLLE WALLACE: That was former D.C. Metropolitan Police officer Michael Fanone, earlier today expressing some, as he said, outrage there, at the idea that the January 6th select committee's hearings which start tomorrow night won't be aired on all networks and worried that they may not move the needle at all in this country with regards to understanding the facts behind the insurrection.

CORNELL BELCHER: I've got to go back to the point that was being made, is that those who most need to hear this information, they -- and let's call it -- I mean, I think it's Fox --

BELCHER: -- that we're talking about, because it's Fox that is not going to cover it. And Nicolle, it's mind boggling to think how Fox covered every sort of Benghazi, you know, story or angle there was, even though there was no there there. They covered Benghazi like it was a Super Bowl, but they're not going to cover, they're not going to cover the attempted overthrow of our government. And it's purposeful, right? When you look at Fox's audience, you know, the point is being made is that the people who actually need to hear this the most and to -- the ideal of this counter-narrative for Republicans, people who actually need to hear this the most, their number one vehicle for information is purposefully not going to -- not going to carry it, and I don't think they're ever -- and I think that is a great disservice.