During the Trump presidency, whenever President Trump's approval ratings would take even a modest dip, Joe Scarborough would gleefully trumpet the news.

But when back in August Biden's approval ratings began to drop, not a peep from Scarborough about it. I tweeted to Scarborough at the time, asking if the cat had gotten his tongue. Radio silence from Joe ensued.

On today's Morning Joe, with Joe having the day off, Mika did acknowledge Biden's disastrous polling elephant [donkey?] in the room. But she did so in an outrageously misleading way, downplaying the severity of the slide. Speaking with Victoria DeFrancesco Soto, Mika said:

"The president's approval rating taking a bit of a hit. What do you think the way forward is for Democrats here?"

A bit of a hit?? Quinnipiac, which is anything but a Republican-friendly poll, has Biden at a historic low of 38%! With 53% disapproving, Biden is WAY underwater.

As I tweeted, the Hindenburg also took "a bit of hit." Perhaps the better analogy was in my follow-up tweet, which had the captain of the Titanic informing passengers not to worry, but that the ship had taken "a bit of a hit." Just like Biden, the Titanic was, of course, also about to go underwater. 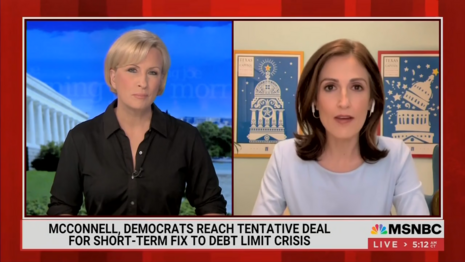 DeFrancesco's advice to Biden was to focus on "everyday Americans" and the potentially disastrous effect of a default stemming from a failure to raise the debt limit.

But nobody this side of Austin believes the debt limit won't ultimately be raised. So the professor's recommended scare tactic doesn't [Titanic alert!] hold water.

DeFrancesco Soto went on to make a dubious claim: that Biden is "winning with the public" by highlighting the dangers of a default. If Biden is "winning," why has his approval rating plunged to 38%?? What would losing look like, professor?

Note: As an example of Scarborough's tendency to trumpet dips in Trump approval ratings, here's a Newsweek article from 2019 in which Scarborough gloated about such a drop. Scarborough claimed that the poll proved that Americans were "punishing" Trump. And Willie Geist called Trump's approval rating "terrible."

Here's the thing: the poll they were reacting to showed Trump with an approval rating of 39%—one point higher than the 38% Biden scored in the Quinnipiac poll.

Mika Brzezinski calling Biden's approval plunge to 38% "a bit of a hit" was sponsored in part by Abbott, and AARP.

MIKA BRZEZINSKI: Victoria Defrancesco Soto, the president’s approval rating taking a bit of a hit. What do you think the way forward is for Democrats here?

DEFRANCESCO SOTO: I think it's focusing on everyday Americans. Those Americans who are not paying attention to congress minute-by-minute.

And I think going back to this debt-limit discussion. The result of defaulting would be catastrophic for folks. Folks who live paycheck to paycheck. Folks in the top 1%, top 10%, who don’t necessarily need to depend on that, it’s not going to affect them.

So I think the president, by highlighting the effect, is winning with the public, and also politically being able to gain points in pushing Republicans forward.