Danny Cevallos has established himself as something of a fly in MSNBC's liberal ointment. Back in 2019, we noted this about his comments on Roe v. Wade during a Morning Joe appearance:

Roe v. Wade is "ripe to be overturned" because "even if you are pro-choice, the right to privacy [upon which Roe was based] does not exist either in the history or the text of the Constitution." Cevallos also said that Roe "stands on a weak foundational basis."

Cevallos was raining on Morning Joe's liberal parade again on Thursday. On a day when liberals are reacting with spiteful glee to the news that criminal charges are expected to be brought today against the Trump organization and its CFO, Cevallos, without spelling it out in so many words, gave evidence suggesting this was a selective prosecution.

"Looking at tax prosecution, looking at the statistics of the many thousands of cases brought, a tiny fraction of those are tax fraud cases. Within that, I’m not sure there were ANY taxable fringe benefit cases brought in federal court last year, still looking, the data just came out recently, but I don’t know if there were ANY. This is not something, taxable fringe benefits, that becomes a criminal tax fraud case very often."

Mika Brzezinski seemed left literally speechless by Cevallos' balloon-bursting. Perhaps it was a technical glitch, but there was dead air for six seconds until Mika finally made a hesistant, 'uh'-filled response! On Friday, the New York Times admitted late in its charges-filed article that "Indeed lawyers with expertise in tax crimes told the Times they could think of no recent example in a criminal case.” 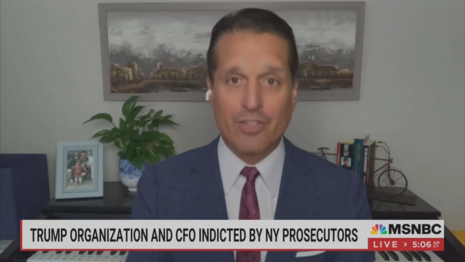 Cevallos did preface his remarks by saying it was "galactically clumsy" of Trump's CFO not to have known that his fringe benefits of a late-model Cadillac and an apartment were taxable.

But his bottom line was that it seemed literally unheard of for people to be criminally prosecuted for such peccadilloes. So, is this a case of selective prosecution, a virtual vendetta by Manhattan's Democrat District Attorney, Cy Vance, Jr.? And how much more will MSNBC allow party-pooper Cevallos on its air to report on the case?

This outbreak of honesty on MSNBC was sponsored in part by Allstate, BMW, and Amazon.

WILLIE GEIST: Let’s bring in MSNBC legal analyst Danny Cevallos. So Danny, we don’t know what’s inside these indictments, we may learn later this afternoon when they’re unsealed. What are you expecting to see?

DANNY CEVALLOS: Well, based on reporting, if this is a case where this was taxable fringe benefits that went unreported and that gave rise to criminal liability for the CFO and the corporation. Then there are two real things to be gleaned. Number one, that would be galactically clumsy for the chief financial officer to not realize that his apartment and his car were not taxable fringe benefits. The IRS has really strict rules about this. I mean, you would need a car, if it was free, with the advertisement on the side that it’s only used for business and occasionally for personal use, and even then that might be a taxable fringe benefit. If it’s a late-model Cadillac that you just drive whenever you want, that’s definitely a taxable fringe benefit. So, there's that portion of it.

But, the other thing to think about is that in the world of tax prosecution, looking at just federal statistics. Of the many, many thousands of cases brought, a tiny fraction of those are tax fraud cases. And then within that, I’m not entirely sure there were ANY taxable-fringe-benefit cases brought in federal court last year. Still looking, the data just came out very recently, but I don’t know that there were ANY. Just to give you an idea, this is not something, taxable fringe benefits, that becomes a criminal tax fraud case very often.

MIKA BRZEZINSKI: All right. Thank you very much. Uh, we’re going to be, uh, following this story and, uh, covering it all day here on MSNBC as we learn more.