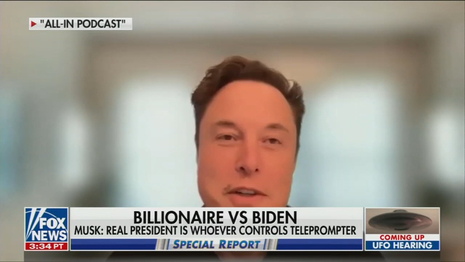 On Tuesday, CNSNews blog editor Craig Bannister reported: “‘The real president is whoever controls the teleprompter,’ billionaire and Tesla CEO Elon Musk said in an interview published Monday.” Bannister explained: “Musk made the observation in an interview with the ‘All In’ podcast, joking with the show’s hosts about President Joe Biden’s apparent need to take more naps due to his lack of cogency when speaking publicly.”

In a separate article regarding that same podcast appearance, CNSNews managing editor Michael Chapman reported on Musk saying that “the ‘obvious reason’ for inflation in the United States is that the federal government printed way too much money that it did not have to stimulate the economy, which increased demand but supply (goods and services) could not keep up – thus, the prices went up.”

Read the full articles at CNSNews.