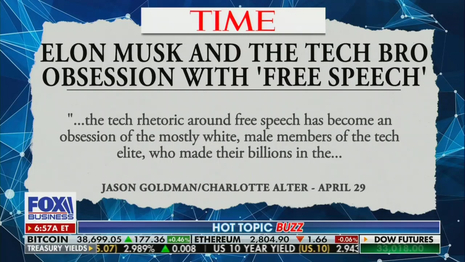 On Saturday, Hot Air’s weekend editor Jazz Shaw reported on “a growing obsession on the left these days wherein the government, the tech oligarchs, and a growing swath of mainstream media outlets have taken to openly mocking the idea of free speech.” He specifically cited: “One of the latest and most glaring examples of this disastrous trend can be found this week at Time Magazine, where correspondent Charlotte Alter has penned a piece with this sort of mockery embedded firmly in the title. Elon Musk and the Tech Bro Obsession with ‘Free Speech.’”

“If you’re not shocked and dismayed by the idea of a journalist putting the words Free Speech in scare quotes, I don’t know what to tell you,” Shaw observed. He quoted Alter fretting: “Why does Musk care so much about this?...’Freedom of speech’ has become a paramount concern of the techno-moral universe.” Shaw called out the outrageous argument coming from a journalist: “Just take a moment to let that sink in. A journalist is seriously asking why Elon Musk (or anyone, really) should ‘care about who can say what on Twitter.’”