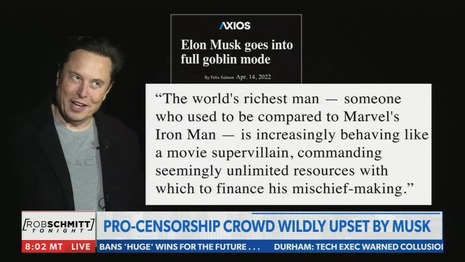 On Thursday, Townhall’s senior writer Julio Rosas reported on ongoing reaction to billionaire Elon Musk’s bid to takeover Twitter and how “some media companies are not taking the idea too well.” He cited one outlet’s particularly outrageous freak-out: “Axios published a story about the latest development but decided to frame it this way: ‘The world’s richest man — someone who used to be compared to Marvel’s Iron Man — is increasingly behaving like a movie supervillain, commanding seemingly unlimited resources with which to finance his mischief-making.”

“Axios is far from the only entity or person who is upset at Musk’s efforts, with some fearing if he is successful, then former President Donald Trump could be allowed back on the platform,” Rosas noted before highlighting a series tweets from prominent lefties decrying Musk possibly buying out the social media giant.