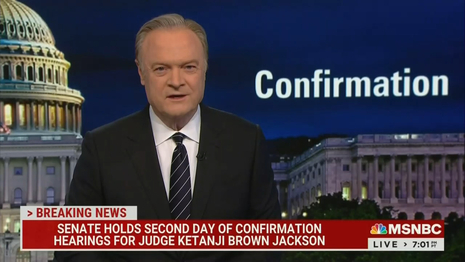 On Tuesday, Twitchy writer Sarah D. called out the laughable hypocrisy of a far-left MSNBC host feigning outrage via tweet over Supreme Court nominee Ketanji Brown Jackson being asked about her faith, following Justice Amy Coney Barrett being routinely attacked for her religious beliefs by the leftist media: “Lawrence O’Donnell was overcome with righteous indignation when GOP Sen. Lindsey Graham brought up Judge Jackson’s religious faith, during a confirmation hearing, no less!”

“How dare you, Senator?! Don’t you know that questions resembling religious tests are completely out of bounds? This sort of thing is just totally unprecedented and inappropriate and immoral and unprecedented!,” Sarah sarcastically proclaimed before highlighting a series of Twitter responses to O’Donnell reminding him of how badly Democrats, MSNBC, and multiple other media outlets treated Barrett for being a devout Catholic. Of course that was the very rhetorical point Senator Graham was making with that line of questioning.