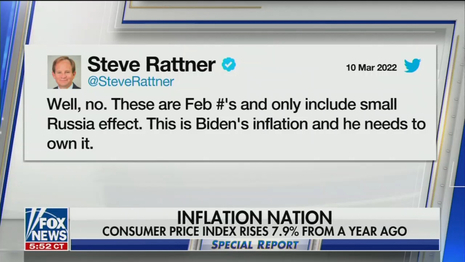 After noting Biden’s attempt to blame months of massive inflation on the war in Ukraine by calling it, “Putin’s price hike,” Yael cited: “Rattner called out Biden’s remarks in a tweet Thursday, noting that the administration’s sanctions on Russia – which were imposed last month – would account for only a small percentage of the devastating inflation figure that reflects the past twelve months.” In the tweet, Rattner scolded the President: “This is Biden’s inflation and he needs to own it.”