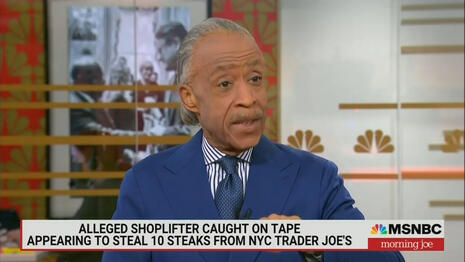 On Thursday, Hot Air’s John Sexton reported on far-left New York Times reporter Nikole Hannah Jones actually attacking fellow leftist Al Sharpton for him daring to say shoplifting was a bad thing. Sexton noted how on Wednesday’s Morning Joe, Sharpton said in part: “...you cannot have a culture where people are just— at random— just robbing and stealing and it’s out of control and it’s put on the covers of newspapers which only encourages others to do it.”

He then pointed out how Jones reacted on Twitter: “For saying something fairly obvious about the need to bring down petty crime when it is up more than 23%, Nikole Hannah Jones lashed out at Sharpton and accused him of legitimizing ‘the carceral state.’” Sexton wondered: “...what alternative is Hannah Jones proposing to make people stop boosting merchandise? She doesn’t say. We’re right back to the foolishness of the defund the police movement, i.e. demanding cities tear down the existing system without any real plan for what comes next.”