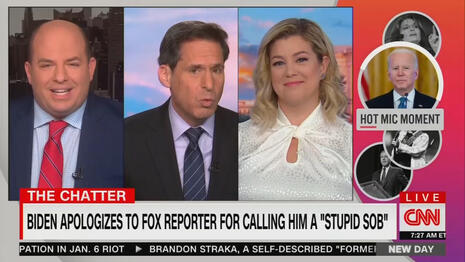 On Tuesday, TheBlaze Weekend Editor Chris Enloe reported: “After President Joe Biden caused an uproar by calling Fox News reporter Peter Doocy a ‘stupid son of a bitch,’ CNN host Brian Stelter worked overtime to minimize the insulting incident.” Enloe explained that Stetler “went to great pains to emphasize that he does not believe the incident is worth widespread media coverage” and even “used the incident to swipe at Fox News.”

Pointing out Stelter’s glaring hypocrisy on the topic, Enloe reminded readers: “While speaking at a rally in March 2018, Trump called NBC News anchor Chuck Todd a ‘sleeping son of a bitch.’ At the time, Stelter claimed that Trump’s comments increased risk of danger for journalists.” Stelter warned: “Calling a journalist a ‘son of a bitch?’ It was wrong when Trump was just a candidate, and it’s even worse now that he’s POTUS. These jabs expose journalists to threats and intimidation.”

Read the full article on TheBlaze.