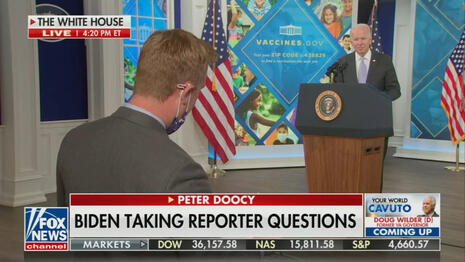 On Thursday, CNSNews Managing Editor Susan Jones reported on President Biden denying that his administration was planning to issue massive payments to illegal immigrants impacted by the family separation policy. “‘That’s not going to happen,’ President Joe Biden said on Wednesday, when a reporter asked him about reports that his administration plans to pay $450,000 each to illegal immigrants separated from their children at the border during the Trump administration,” Jones explained.

After being asked about the report by Fox News White House correspondent Peter Doocey, Biden shot back with this angry response: “If you guys keep sending that garbage out, yeah, but it’s not true....That’s not going to happen.” Jones pointed out:

ACLU Executive Director Anthony D. Romero responded to Biden’s “not going to happen” comment with the following statement: “President Biden may not have been fully briefed about the actions of his very own Justice Department as it carefully deliberated and considered the crimes committed against thousands of families separated from their children as an intentional governmental policy.”

Read the full article on CNSNews.