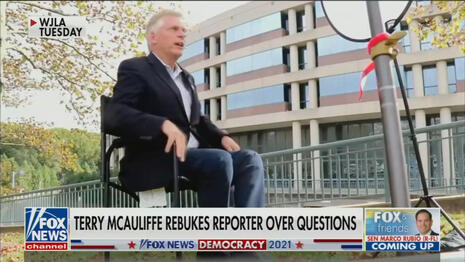 On Tuesday, FoxNews.com’s Joseph Wulfsohn reported on Virginia Democratic gubernatorial candidate Terry McAuliffe storming off in the middle of an interview with a local reporter and telling the journalist: “You should’ve asked better questions.” The sit-down exchange was set to last 20 minutes, but the frustrated Democrat abruptly ended the interview after only 10 minutes.

As Wulfsohn explained how the local ABC News affiliate offered time to both candidates: “WJLA 7News reporter Nick Minock conducted interviews with the former governor and his GOP rival Glenn Youngkin, sharing highlights on air while releasing the full interviews and transcripts online.’” After Minock grilled McAuliffe on a wide range of topics, the Democrat couldn’t take it anymore: “All right, we are over. That’s it....You should have asked better questions early on. You should have asked questions your viewers care about.”