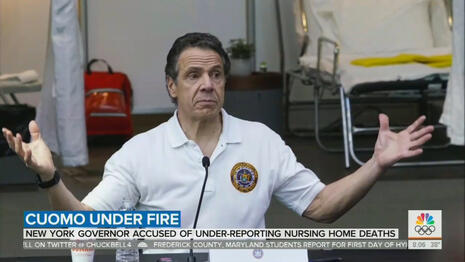 Astonishingly, since the latest bombshell landed on Friday in the scandal swirling around New York Governor Andrew Cuomo’s mishandling of COVID in nursing homes across the state and his administration’s attempt to cover it up, ABC News has only offered a pathetic 59 seconds of air time to the story. Meanwhile, CBS finally managed a full report on the controversy Tuesday morning and NBC has provided multiple segments in recent days.

On Friday, ABC’s World News Tonight only provided a 26-second news brief on a top Cuomo aide admitting that New York nursing home COVID death totals were covered up out of fear that releasing such information could “be used against” the Governor.

After Friday evening, ABC completely ignored the scandal until Monday’s World News Tonight, when correspondent Eva Pilgrim included 33 seconds on the story during a broader report on the pandemic. She briefly noted a press conference Cuomo held that afternoon in which he was “addressing his handling of the numbers of coronavirus deaths in nursing homes” and “defending his record.”

While all three network evening newscasts on Friday only offered seconds of coverage each, on Saturday, NBC’s Today show aired a full report on the topic. Another full report aired on Monday’s NBC Nightly News and Tuesday’s Today show.

CBS only featured seconds on the Cuomo scandal during Friday and Monday’s Evening News broadcasts, but Tuesday’s CBS This Morning finally included a full segment.

In sharp contrast, ABC’s Good Morning America on Tuesday completely censored the news, with the show focused on stories like the “backlash” against Bachelor host Chris Harrison over comments deemed racially insensitive and the late Larry King’s “secret will.”

Apparently its more important for ABC to cover tabloid gossip rather than a scandal embroiling a Democratic governor that cost lives.