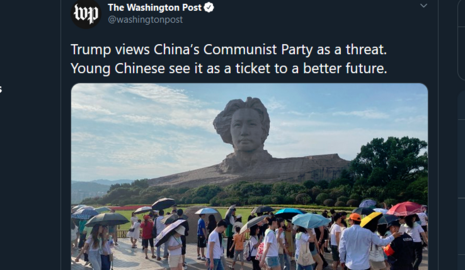 “The overwhelming humidity of the Chinese summer was not enough to stifle the ardor of the crowds of 20-somethings honoring Mao Zedong, the founding father of Communist China,” that’s how a disgusting Tuesday morning article in The Washington Post began. The headline of the shameful propaganda piece declared: “Trump views China’s Communist Party as a threat. Young Chinese see it as a ticket to a better future.”

The leftist rag’s Beijing bureau chief Anna Fifield excitedly described how indoctrinated Chinese youth flocked to “the giant statue of a young Mao — China’s equivalent of Mount Rushmore — staring out over the Xiangjiang River.” She marveled at how one young university student “jostled on a recent day for the perfect selfie with the Great Helmsman.”

Deciding that being an apologist for China’s brutal Communist regime was more important that being an actual journalist, Fiffield completely ignored the fact Zedong was responsible for the deaths of 65 million people as his heinous Great Cultural Revolution brought about widespread famine, imprisonment, and executions.

The Post article briefly fretted: “After seven decades in power, the ruling party has faced potentially existential challenges over the past year, from pro-democracy protests in Hong Kong and an economic slowdown to a devastating coronavirus and, most recently, once-in-a-generation floods that have wreaked destruction across central China.”

Fifield then breathed a sigh of relief:

But far from diminishing its stature at home, as some in the Trump administration appear to believe, the party’s response to some of these crises has helped solidify the support of existing and aspiring members — or at least neutralized grumbling.

Chinese who were complaining in February about the party’s coronavirus coverup reflect more positively on their experience now that they can see, through the American example, how much worse it could have been.

After noting how “the Trump administration is taking aim at the Communist Party,” the so-called reporter turned to a party mouthpiece to deliver anti-American talking points:

Wang Wei, a professor at the Hunan provincial branch of the Communist Party School, said Pompeo’s comments revealed the Trump administration’s worry about China eclipsing the United States. “This just shows that they fear a stronger Communist Party and a stronger China after we showed our might in the battle against the coronavirus epidemic,” she said.

Showing what a true embarrassment she is to her profession, Fifield actually touted benefits of toeing the Communist Party line: “Party membership means better education prospects and better jobs, more politically advantageous marriages and nicer apartments. For many, it is a ticket to a brighter future.”

It’s really no surprise that the Post would publish this drivel, since for years it has included propaganda inserts in the paper titled ChinaWatch, prepared by state-run media, China Daily. Those publications routinely deliver rambling from the Communist regime and cheer “Comrade Mao.”

In December, The Washington Free Beacon uncovered that China Daily repeatedly violated federal law by not disclosing to U.S. government the millions of dollars it has spent on such propaganda inserts in major American newspapers.

Sadly, the Post’s Tuesday article was just the latest chapter in the long, pathetic history of American media outlets serving as cheerleaders for Communism.