Last night's GOP presidential primary debate was remarkably void of personal insults or theatrical flourishes. One Daily Beast writer also thinks it was marked by too much civility as she slammed Sens. Marco Rubio and Ted Cruz and Gov. John Kasich for failing to condemn Donald Trump for either a sucker-punch thrown at a North Carolina rally or for his campaign manager's alleged manhandling of a Breitbart reporter following a press conference earlier this week.

"It was the debate that dealt with everything calmly—including the issue of violence. And what a shame," Nuzzi lamented in her March 11 article, "Because more than at any other time in his nine-month campaign for the Republican presidential nomination, the word civil does not apply to Trump or his operation this week."

After reiterating the violent episodes to which she was referring, Nuzzi went one-by-one in attacking the non-Trump candidates left in the primary race for failing to strongly criticize Trump for both lying about protesters at his events having been violent and for failing to lay responsibility particularly on Trump for the physical altercations that cropped up this week on his campaign:

When Trump was asked to explain his violence-stoking rhetoric—like, on Feb. 23, when he said he wanted to “punch” a protester “in the face”—Trump erroneously claimed that protesters at his events had been violent in the past.

Rather than correct Trump or condemn the behavior of his supporters and staff members, his opponents deflected questions about violence even better than he did. 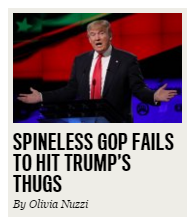 “Listen, I think for every one of us, we need to show respect to the people,” Cruz said.

And then he veered off into another universe entirely.

“You know, we’ve seen, for seven years, a president who believes he’s above the law, who behaves as an emperor… Turn the camera around here. How many of y’all feel disrespected by Washington?”

And John Kasich? “I worry about the violence at rallies, period,” he said.

And then, quickly, “Jake, here’s what I think is happening: There are people out there who are worried about their jobs.”

But Rubio did worst of all. “I’m concerned about violence in general in the society,” he said, “and by the way, the first people who are facing that violence are our law enforcement officers and they deserve our respect and our thanks for everything they do for us. On the issue of anger, yes, people are angry, of course they’re angry—every institution in America has been failing us for the better part of 20 or 30 years!”

The issue was not anger, you’ll recall, but violence. And then somehow we ended up discussing the moon landing.

“My grandfather was born in 1899, before there were airplanes in the sky,” Rubio said, for what reason it wasn’t clear. “One night in the summer of 1969, he watched a man set foot on the moon.”

Well, this debate was just too civil to dwell much on any of that.