Carly Fiorina Pushes Back Against Chris Matthews on 'Hardball', Defends Charges That Hillary Lied Re: Benghazi

Republican presidential contender Carly Fiorina has to be Chris Matthews's worst nightmare: a conservative who punches back hard and doesn't let Chris control the narrative during his interview.

Consider this part of her interview on the August 6 edition of Hardball:

CHRIS MATTHEWS, host: You called Hillary Clinton a liar tonight on a number of occasions. Do you want to explain why you would use such a almost end-of-conversation term for your possible opponent next year? 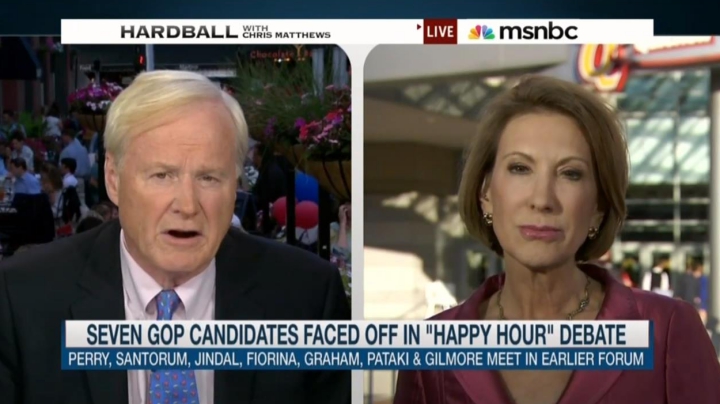 CARLY FIORINA: Because it's true. You know, one of the things that I think people are tired of in politics and Republicans do it as well is we don't use common-sense language. We talk in sanitized sound bites. I don't but most politicians do. People are tired of sanitized sound bites and bumper sticker rhetoric. They want to have a conversation about the real issues. And by any standard common sense measure, Hillary Clinton has lied: about Benghazi, and about her emails, and about her server.

MATTHEWS: How do you debate someone if it comes to that, you would have three national debates with someone you once again just, this moment, called a liar? Do you just begin the debate with I don't believe a word you say? You're a dishonest person? It seems to me, having worked in Washington all these years. You say it's just not common sense. But you really think that's a way to engage in a debate? To call your opponent a liar? I'm astounded by that judgment of yours.

FIORINA: Well, first I was very specific about the subjects about which I think she has lied. I didn't say she lied about everything. I was very specific. Very fact-based, actually. You are the one who's made a generalized comment now about her. Not me.

FIORINA: I will debate her on the facts and the issues.

MATTHEWS: Go through your list of where she's lied.

I will ask her why she continues to say she's  a champion of the middle class while every single proposal she has put forward makes crony capitalism worse and worse and worse, which makes income inequality worse. I would ask her why she declared victory in Iraq in 2011. Why she called Bashar al Assad a positive reformer. Why she thought she could stop Putin's ambition -- a man I have met -- with a gimmicky button. I will ask her why she got every single foreign policy issue wrong as Secretary of State. That's how I'll debate her. On the issues.

MATTHEWS: Let me put a fine point on that. Why did she lie, or how did she lie, as you put it, about Benghazi? Where was her lie?

MATTHEWS: Thank you, Carly Fiorina. I see why you stood out tonight.