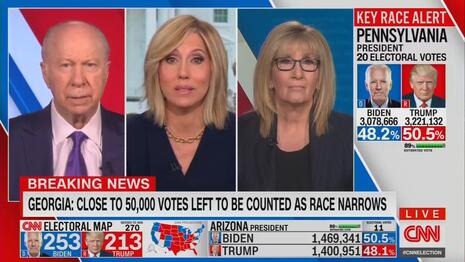 For months leftist CNN has been rooting for Joe Biden to win the 2020 presidential election. During Thursday’s ongoing special coverage of the election, they assumed Biden would win before all the votes had been counted and were already whining about how Republicans will likely remain in control of the Senate, taking away any mandate the Democratic nominee might have. Host Alisyn Camerota complained: “If Joe Biden wins and we have a Democrat in the White House with a Republican-led Senate does that spell gridlock for the next four years?”

Rather than being objective and reporting the facts, the leftist-aligned media has been complaining that this is not the blow-out they predicted or that there was no “moral victory” for Biden. This complaint about the Senate is just the latest in a long line of biased complaints.

Gergen also oddly complained about another issue: “And then on top of that, something we haven't had in a long, long time is a President who is leaving office who may be a continuing force in American politics.” It’s not like former Presidents like Obama have endorsed over 200 Democrats in midterm elections, met with them, or campaigned for presidential candidates right?

Jamie Gangel, a CNN special correspondent further the attack: “He does not want to leave the spotlight if he loses, I don't think he will.” It seems that no matter what the situation or how the election looks like, the leftist hacks are determined to attack President Trump.

Even with the votes still being counted, Gergen was preemptively praising a future Biden administration, while swiping at Trump in the process: “… if he can restore trust in the White House and people think we finally have a leader that we enjoy working with, that could give him some additional leverage because he's going to need it.” To his credit, Gergen at least briefly acknowledged the difficulties Biden will face between the promises he made to the radicals in his own party.

Rather than have a meaningful discussion or just reporting on the facts, CNN defaulted back to their favorite tactic of attacking Trump and Republicans while boosting Biden and the Democrats.

This CNN propaganda was sponsored by Panera Bread and Advil. Click on the links to let them know what you think.

A transcript of the November 5th Coverage is included below:

CAMEROTA: Meanwhile, as Brianna just explained if Joe Biden wins the White House he is most likely will be face ago Republican majority Senate. … David, you've been around Washington for a long time. So, let's talk about that scenario. If Joe Biden wins and we have a Democrat in the White House with a Republican-led Senate does that spell gridlock for the next four years?

DAVID GERGEN: It doesn't spell gridlock but it does spell very tough to govern successfully. Let’s face it. Even the Democrats are confident about now about taking the White House. The reality is it may be an apparent victory. If you have Mitch McConnell, I know John just said he does have a record of working with Joe Biden, but nonetheless Mitch McConnell is going to be -- and the Republicans in the Senate will be a blocking force. At the same time, you know, the Supreme Court is taken and then Joe Biden will have all this pressure from his left with AOC, the squad and others. He will be under a lot of cross-pressure to deliver on the Progressive agenda the very thing that Mitch McConnell is going to try to block. So you can see that's difficult. And then on top of that, something we haven't had in a long, long time is a President who is leaving office who may be a continuing force in American politics. Remember that what happened here with Trump, he got 65 million votes, 65 million votes. 5 million more than he had last time. Every indication has been he wants to be a continuing force. People come down to Mar-a-Lago to kiss his ring and that sort of thing. This will be tough. Joe Biden is the right person to be negotiating it and navigate this, but it will be tough.

CAMEROTA: I mean, if Democrats thought that Donald Trump was going away, even if he were to lose, they probably have another thing coming. And so, Jamie, what about that question that John Berman just posed and David picked up on, do we know how Mitch McConnell and Joe Biden get along? Because we all remember 2008 when Mitch McConnell famously said that his single most important objective was to block Obama's agenda and make him a one-term President, does that same sentiment extend to Joe Biden?

JAMIE GANGEL: So they do get -- let's say -- put it this way, they have gotten along with the past and I think to David's point, though, there is both parties have to come to terms with how divided the country is. Democrats have to come to terms with that huge number of votes that Donald Trump just got despite the fact that I would say he mishandled -- mishandled coronavirus, despite the fact he has a tenuous relationship with norms and the truth, and Republicans are going to have to come to terms with exactly what David just said and that is I don't think Donald Trump is going anyplace and do they want to try to wrestle the party back from him? Can they do it? He does not want to leave the spotlight if he loses, I don't think he will. I talked to two people who have worked very closely with him and they both said to me don't be surprised if he says or teases that he might run again in 2024 if he loses. So the Republican party is going to have to deal with that as well as Joe Biden if he wins.

CAMEROTA: Really interesting reporting, Jamie. David, I want to pick up on what you just said about how Joe Biden is going to have to negotiate the left side of his party, the Progressive wing.

CAMEROTA: But this race was so much tighter than pundits predicted, than polls predicted. So doesn't that send the message to Joe Biden that he has to lead from the middle?

GERGEN: Yes, I believe that the pressure -- I think he is going to be under cross-pressure. I think he does need to lead more from the middle and have cabinet members that reflect more to the middle but after all the Progressive wing of the party supported him through this campaign, they kept their mouths shut. It wasn't the Bernie Sanders of four years ago that Hillary thought may have cost him the presidency. Bernie Sanders was out there complaining, Elizabeth Warren has been campaigning for him, AOC has been campaigning for him, they brought out a lot of young voters, you know, this avalanche of people who voted early, a lot of them were young, inspired by these Progressives. So if you're sitting there in the White House you have to pay serious attention to it. They are the future of the party no doubt. So I think he has to navigate between. How he does that I'm not sure. He needs probably to build up his own relationship with the American people so that he comes into any negotiation with a lot of stature and a lot of people pulling for him. In other words, if he can restore trust in the White House and people think we finally have a leader that we enjoy working with, that could give him some additional leverage because he's going to need it.

GANGEL: Could I just add one quick word, coronavirus.

GANGEL: If he wins this is not a usual year he's going into and I think some of the pressure, political pressure, will be lessened by the fact that there is going to be one objective and that's, you know, getting control of covid.

CAMEROTA: Really interesting and first we have to count all the votes.