Despite Having Lied to Them, CNN Again Trots ‘Anonymous’ to Attack Trump 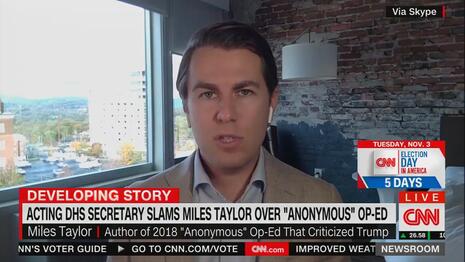 Over the last 24 hours plus, CNN and other leftist networks have gone crazy over the revelation that noted Trump critic Miles Taylor was the anonymous author of the 2018 New York Times op-ed tripping the President. With Tony Bobulinski coverage nowhere to be found and the election less than a week away, the timing of this announcement was suspicious. Instead of reprimanding him for having lied to CNN on-air about whether he was Anonymous, they've brought Taylor on to further bash Trump.

Thursday morning's CNN Newsroom followed the trend, with co-host Jim Scuitto lining up pitches: “You were part of a sort of resistance within the administration working diligently to slow or stop his agenda here. I'm not asking you to out them, because that's their choice. I am asking you, though, to back that up. How many? How senior? What did they do? Why aren't they speaking out now?”

The questions spoke to the narrative Taylor started two years ago, that he had like-minded anti-Trumpers inside the administration fighting back against the President's impulses. Before revealing himself, Taylor has been a noted critic of the President since leaving the administration to the point that CNN signed him as a contributor.

To his credit, Sciutto pushed Taylor on why he had revealed himself, but went no further when Taylor dodged. Instead “Anonymous” opined: “I did it so people would pay attention to the message and deprive Trump of the opportunity for a personal attack.” While wanting your arguments to be discussed is valid, not showing your evidence is not.

Even if Sciutto and/or CNN won’t admit it, the reason why he did so was to concoct and drive yet another anti-Trump news cycle before Election Day. Taylor declared: “[T]he American people, it’s up to them now, to hold Trump accountable.” Talk about not only a partisan agenda, but a dishonest one that's not being level with viewers.

Sciutto did not ask for evidence of the allegations, documents, conversations, or witnesses to bolster his claims about the President. Instead, he asked questions like: “We just learned this morning that there were warnings from inside the administration about a shortage of beds for babies as this family separation was taking place. Did you voice opposition internally to that policy, which you now criticize, did you work to prevent a move like that while you were in that position.”

Predictably, he refused to press Taylor when he made himself out to be a victim in this saga: “This has cost me in my job, my personal life, my marriage, my finances and my safety.”

Since leaving the administration, Taylor has been working for Google and, as we said earlier, signed by CNN (in addition to his best-selling book).

All told, CNN was more interested in pushing an allegation that hurt Trump than seeking and reporting the truth.

This CNN bias was sponsored by Liberty Mutual and Amazon. Click on the links to let them know what you think.

A transcript of the October 29th Coverage is included below:

JIM SCIUTTO: Welcome back. Acting Homeland Security Secretary Chad Wolf has now responded to his Department's former chief of staff, Miles Taylor. Taylor, you’ll know now admitted he wrote the anonymous 2018 op-ed, highly critical of President Trump, a book later followed. In a statement Wolf said quote Mr. Taylor demonstrates that he was clearly pursuing a self-serving self-promoting agenda while at the department of homeland security rather than pursuing an agenda aimed at securing the Homeland. Well, Miles Taylor he joins us now to discuss. Good morning.

MILES TAYLOR [CNN Contributor]: Good morning, Jim. Thanks for having me.

SCIUTTO: Let me begin with timing. You wrote the op-ed more than two years ago, you resigned from the administration and published a book along the same lines a year ago. Why did you wait for days before the election to publically identify yourself?

TAYLOR: It’s a good question Jim. What I said all along, especially in the book is -- in a way where I would deprive him of the ability to do what he always does, Jim. Personal attacks. Even when a Secretary of Defense like James Mattis comes out and criticizes him the President mercilessly tries to undermine that person's character and the actual message gets lost. I did it so people would pay attention to the message and deprive Trump of the opportunity for a personal attack. Let me make one thing clear, at no point was I afraid to subject myself under my name to the criticisms and scrutiny that I deserve. That's why I came out months ago under my own name to say what I did in the administration.

SCIUTTO: But wait Miles, on that point. You may have deprived the President the ability to attack you until this moment but the fact is the administration attacked others who they speculated were actually anonymous. And some of them suffered threats. I wonder, do you owe them an apology for in effect, allowing them to be subjected to that.

TAYLOR: That's a good question, Jim. I just moments ago apologized to someone who was wrongly accused. But at that time I asked my agent to come out and disavow any of those individuals were actually Anonymous. And they did that. No one deserved the scrutiny but me. But at the end of the day, this isn't about me, this is about the President. The reason I came out now is because I want to say to the American people, look, there's no one going to ride in on a white horse and save you from Donald Trump now. The masks are off. Any other officials who believed what they told me they believed, need to take their masks off too. Because the American people, it’s up to them now, to hold Trump accountable. You started with a quote from someone I don't want to name, but a quote from someone in the administration who said they're disappointed because they never heard these things from me when I was in the White House, when I was in the administration. That's completely false. In fact, it's sad to hear former colleagues say things like that. The same former colleagues who would tell me after meetings with the President they thought he was unfit for office.

TAYLOR: Jim, let's start off first talking about the policy. Okay. This is one of the most inhumane, disgusting things that the Trump administration ever did. Okay. This is emblematic of the lack of compassion in Trump's immigration policy. Behind the scenes you bet we fought this tooth and nail. In fact, from basically month one of the administration when the White House wanted to implement an even crueller version of the policy. And then because DHS wouldn't they went around our backs, worked with the Justice Department and launched it anyway. I was the individual who helped write the executive order to end the policy and then Jim spent every month until the end of the administration telling the President no when he begged us to reinstate this cruel and inhumane policy. This is going to go down as one of the darkest marks of the Trump presidency and I'm glad the full story is coming out.

SCIUTTO: Okay, I want to ask you, because a big part of your message in 2018 with the op-ed and later in the book was that you were not alone, right. You were part of a sort of resistance within the administration working diligently to slow or stop his agenda here. I'm not asking you to out them, because that's their choice. I am asking you, though, to back that up. How many? How senior? What did they do? Why aren't they speaking out now?

TAYLOR: Jim, I think I can count on two hands the number of people around this President that I really think are true loyalists that are mega Maga and just about everyone held the sentiments. But you don't have to hear it from me anymore and thank god you don't because who cares who Myles Taylor is. But after I published the op-ed we heard from Donald Trump's Chief of Staff, Communications Director, Secretary of Defense, Secretary of State, Director of National Intelligence and the Vice Chairman of the Joint Chiefs of Staff, all of whom have called into this president's character and fitness for office. John Kelly just said Donald Trump was the single most flawed human being he has met in his life. But let’s not just focus on him Jim. But I have got colleagues who have way more to lose, like Elizabeth Newman and Olivia Troye, and John Mitnick who came out, were my colleagues, said the same thing. They have spoken candidly, They’ve put their lives on the line. This is not easy to speak out against the President, I'm not asking anyone to play the violin for me. This has cost me in my job, my personal life, my marriage, my finances and my safety. And the same thing has happened to my colleagues. Trump has created a culture of intimidation but we won't be intimidated and I don't think Americans should be intimidated to speak out against this man.