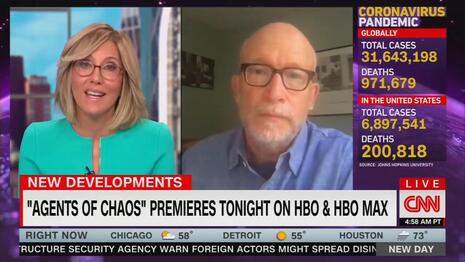 CNN host Alisyn Camerota spent nearly ten minutes gushing over the new, highly political HBO documentary, and attacking President Trump with its director and producer, the liberal Alex Gibney. Throughout the course of the segment, Camerota neglected several conflicts of interest: the fact that the media is supposed to be unbiased, and the fact that CNN’s parent company Warner Media, also owns HBO. As though she were blurbing a movie poster, Camerota cheered: “The documentary is fantastic. I had a chance to watch part one of it, it was really revealing.”

The documentary in question titled Agents of Chaos which has studied and reports on Russian interference in the 2016 Presidential election. Based off of CNN’s coverage and the director’s own statements, it takes an anti-Trump angle, especially regarding Trump’s “collusion” with Russia. Gibney noted “I think that the report pretty definitively does suggest that there was collusion or cooperation.”

This statement flies in the face of the Mueller Report that was released in 2019 which concludes that there was no collusion between President Trump and the Russian government regarding the latter’s interference in the election. Gibney went as far as to question the efficacy of Mueller’s investigation: “They did a reasonably good job of investigating though they probably didn't rely sufficiently on subpoenas particularly when it came to the President of the United States.”

This continues a trend that has recently been seen in the liberal media that for two years put Robert Mueller on a pedestal and heralded his then upcoming report. Now they attack the investigators’ reputation and conclusions because it hurts their attempts to attack President Trump.

Later in the segment both Camerota and Gibney outright accused Donald Trump of being concerned only about making a deal with Russia to build a Trump Tower in Moscow. As is often the case, the Media is more concerned about bashing the President and promoting the Democratic party then it is about accurately reporting the facts.

To be fair, Ms. Camerota was open at the very end of the segment about the second conflict of interest, that Warner Media owns both CNN and HBO. This does not excuse the fact that a news show took up ten minutes of its time to basically promote a movie that would make its company money. Throughout the broadcast, CNN has been able to promote movies and shows with commercials, not with who segments.

This anti-Trump propaganda was sponsored by Direct TV and Priceline. Click on the links to let them know what you think.

A transcript of the September 23 broadcast can be found below:

ALISYN CAMEROTA: A new warning from the FBI. Just 41 days before election day, the Bureau says foreign actors and cyber criminals could exploit the time required to certify and announce election results by disseminating disinformation that includes reports of voter suppression, cyber-attacks, targeting election infrastructure, voter or ballot fraud and other problems intended to convince the public of the election's illegitimacy. Joining us now is Alex Gibney, he’s an Emmy and academy award winning documentary filmmaker who has a brand new documentary called "Agents of Chaos" and it debuts tonight on HBO and HBO max. Alex, great to see you. It couldn't be more timely for everything you have investigated for "Agents of chaos." I guess the FBI warning comes as no surprise to you after you spent years of looking at what Russian did in the 2016 election.

ALEX GIBNEY [Producer/Writer/Director, Agents of Chaos]: No, it really doesn't. I mean, for the 2016 election, past is prolong. I mean, so many things that the Russians did and the way they took advantage of certain flaws in our system in 2016 are now coming back to haunt us again in 2020. In 2016, you know, Donald Trump on the stump kept saying if I lose the election is going to be rigged. And the Russians were in election systems not to flip votes, but to sow doubt on the legitimacy of what everyone saw as an inevitable Hillary Clinton win. Today again, Donald Trump is casting doubt on the legitimacy or the -- or the accuracy of results if he were to lose. And so once again, I believe that the Russians by a cyber means will amplify our own President's attempts to undermine confidence in the system.

ALISYN CAMEROTA: In fact, according to "The New York Times," yesterday, it's already happening. And in fact, what David Sanger's reporting suggests, is that President Trump is making it easier this time for Russian trolls. They are working from home, as he says. Before they used to have come up with creative conspiracy theories out of whole cloth. Now what they're doing is lifting President Trump's Twitter feed. That's where they're getting their material and I know that you and agents of chaos are no stranger to the Internet Research Agency. What is that?

GIBNEY: The Internet Research Agency is a private enterprise run by a guy named Vevgeny Prigozhin and he's Putin's chef. He has been given by government contracts a lot of money by Putin over the years and he does off the books operations. So that gives Vladimir Putin deniability. The IRA was the center for all of the troll activity that was conducted on social media in 2016 and, you know, it turned out to be effective. But again, going back to what you were saying, Alisyn, it affected not in terms of injecting something new in the blood stream of the American politics, but by exasperating and flaming passions already here. So in the case of Donald Trump, you know, the film is called "Agents of chaos." I think that one of the key agents of chaos is Trump. Russia never supported his candidacy because of policies – they supported his candidacy because they felt he was an agent of chaos, who would do a lot to take a wrecking ball to American institutions.

CAMEROTA: Let's take a look at "Agents of Chaos."

UNIDENTIFIED ACTRESS: I know people ask if Ira is pro Trump. That is a tricky question, but the IRA is anti-America. In general, were interested in any message that weakens the democratic institutions of the U.S. … Create chaos was a primary goal, weakening's Hillary's messages and position and identity and amplifying Donald Trump's campaign is a good means to create this chaos. … I think it's targets trust.

CAMEROTA: Again the title is, "Agents of chaos." And so I mean, it sounds like they only perfected their practice since 2016 so what should we know as we head into 2020 now?

GIBNEY: We should be aware. I mean, we should be on the lookout for disinformation. And dig down deep when you hear reports and make sure that, you know, we rely on outlets that we end up trusting. But the word should be trust but verify. There's a lot of misinformation and disinformation in social media and to some extent even in mainstream media. We have to be cautious and insist on fact-based reports that we can rely on to guide our actions.

CAMEROTA: I think that, you know, there was so much reporting about the Mueller report and I think that in many places Americans reached their saturation level or what they considered saturation level with trying to understand Russian interference. From your investigation of putting this special together what surprised you still? What did you learn?

GIBNEY: Well, I learned a couple of things. One, how big and pervasive was the Russian attack and also how much the candidacy of Donald Trump revolved around corruption and banality in ways that kind of put a lie to sort of the Manchurian candidate stereotype of, you know, the whole Russia Russia Russia thing as Donald Trump likes to call it. One of the key things that we learned was that Donald Trump was praising Vladimir Putin on the campaign trail, not for any policy reasons but because he was attempting to get rich off of Trump Tower in Moscow and that deal was very much on the table. Right on up to Donald Trump's surprising election which even surprised Vladimir Putin. You know? Until, you know, Donald Trump went to his backup plan which was President of the United States.

CAMEROTA: I mean, this is exactly what Michael Cohen, you know, who the self-described fixer for President Trump says the same thing. Sometimes it's just the simple explanation, you know? Instead of all of the complicated explanation, it’s the Trump Tower, he wanted to build Trump Tower in Moscow, maybe that's why he’s long been currying favor with Putin.

GIBNEY: And running for President is a way of inflating your brand. We have in the film Felix Sayter who was working, with Michael Cohen to put that Moscow Trump Tower deal together and he says the same thing.

CAMEROTA: I know you had a chance to sit down with one of Robert Mueller's prosecutors at least once and you know Andrew Weissmann has also talked to the Washington Post yesterday where he’s basically said that the Mueller team could have done more. Is that the upshot?

GIBNEY: I think that the -- it's fair to say that the Mueller report failed in this respect. They did a reasonably good job of investigating though they probably didn't rely sufficiently on subpoenas particularly when it came to the President of the United States. But the big failure was not telling a story and that allowed, you know, Attorney General Barr to take advantage of that lack of storytelling, you know, skill, to misrepresent the conclusions of the report. I think that the report pretty definitively does suggest that there was collusion or cooperation -- let's use cooperation or what Tim Dee Snider uses in the film, seduction between Trump and Putin. There was no red phone. There was no legal conspiracy, but there was a lot of crosstalk and cooperative support.

CAMEROTA: Well, great to talk to you. The documentary is fantastic. I had a chance to watch part one of it, it was really revealing and everyone can watch the two-part documentary "Agents of chaos" tonight at 9:00 P.M. On HBO and HBO max and we should note that HBO is owned by CNN's parent company Warner Media.