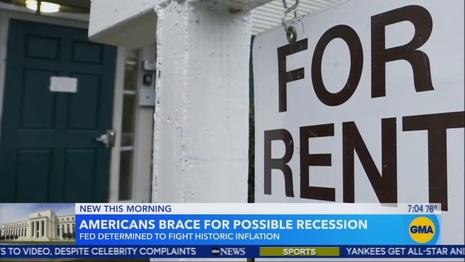 The story reported by David Harsanyi said this:

“It’s now clear that the Hunter Biden story was real, with Hunter himself acknowledging a federal probe into his taxes — one that reportedly began in 2018. Really, it was always clear. Yet when the New York Post broke the details, virtually the entire journalistic establishment and left-wing punditsphere defamed the newspaper, claiming it was passing on Russian “disinformation” or partisan fabrications.

The political media quickly began pumping out process stories about the alleged discord in The Post’s newsroom and about the problems with the reporting. In so doing, of course, they did practically no reporting on the substantive allegations that Joe Biden’s family had spent years cashing in on his influence.”

As noted here in NewsBusters, the liberal media’s reflex to protect Biden is yet again on display, this time with the Biden problem being that yes, indeed, the U.S. has just experienced two quarters of negative economic growth — considered by economists as the official sign the US is in a recession. (For more, see Accuracy in Media's comprehensive round-up of media spin.)

But wait! That’s Joe Biden in the White House, not Trump or some other Republican! The media has quickly rolled out its latest “protect Joe” campaign.

U.S. economy just had a 2nd quarter of negative growth. Is it in a recession?

“While two consecutive quarters of negative growth is often considered a recession, it's not an official definition.

The White House has pushed back against calling the current economy a recession…..President Biden cited record job growth and foreign business investment as signs of strength in the economy. ‘That doesn't sound like a recession to me,’ Biden concluded.”

Consecutive quarters of falling GDP constitute one informal, though not definitive, indicator of a recession.

The story was from the Associated Press, which said this:

“The decline that the Commerce Department reported Thursday in the gross domestic product — the broadest gauge of the economy — followed a 1.6% annual drop from January through March. Consecutive quarters of falling GDP constitute one informal, though not definitive, indicator of a recession.”

From CNN Business was this:

“While a recession is commonly defined by two consecutive negative quarters of gross domestic product growth, there's no steadfast rule governing what defines a recession in the United States.”

Newsweek put it this way:

“But despite the rule of thumb, the second consecutive annualized decrease in the new GDP figures released Thursday does not necessarily indicate a recession.”

“….you can bet that were the Republicans in power, Democrats would be calling two quarters of GDP decline a recession.”

And so would, yes indeed, the liberal media.

So what do we have here? What we have is this.

In the Biden era the topics in the liberal media can change. It can be Hunter Biden’s “laptop from hell.” It could be the disastrous Biden skedaddle from Afghanistan or the utter chaos at the U.S. Southern border. It could be the all too obvious ongoing tale of Biden’s mental deterioration. This week the topic is the shape of the economy and the blatantly obvious signs of a recession.

But whatever the topic, you can depend on the lefty media to be there and, in their own subtle and not so subtle fashion, defend ole Joe.

The real point here at this juncture in Biden-time is that the American people are on to the media’s game. Which in turn produces a headline like this one from the Gallup polling organization on July 18 of this year —  mere days ago:

The Gallup report begins this way:

Which is to say, after almost two full years of the liberal media covering for Joe Biden, the American people are on to the game. They get it.

And they have now begun to rate the media’s credibility accordingly.

Bluntly put, in the eyes of the vast majority of the American people, the liberal media has no credibility.

In the words of the late, great Rush Limbaugh?