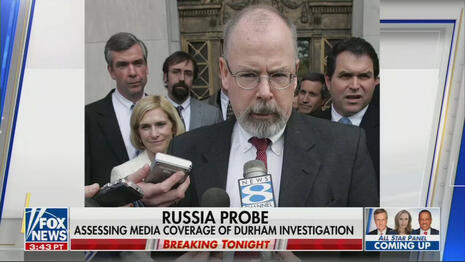 Over there at The Wall Street Journal, the paper’s Kimberley Strassel, as always a superb detective of behind-the-scenes shenanigans, has dissected the recently released filing by Special Council John Durham.

Her findings make plain that Durham points to the tie between all those lefty techies and the Clinton Campaign, joining forces to spread “an inference” and “narrative” in the media that tied then candidate Trump, through the Trump Organization, to Russia-based Alfa Bank. And doing it to “please certain ‘VIPs’” in the Clinton Campaign.

What Strassel also notes is that the Durham revelations that the Clinton Campaign was spying on candidate Trump and then, later, President Trump, have been ignored by the liberal media. She writes:

The press initially tried to ignore the story, then resorted to parsing the definition of ‘spying,’ justifying the accused, and trashing Mr. Durham…..The wonder is that the press and others are stepping up for another humiliation—when the disturbing actions of the creators of the Alfa narrative are already so easy to document, and in their own words.

Pediatricians call it "breath-holding spells." It is when children hold their breath when upset until they experience syncope, or passing out. The media in Washington appears close to a collective faint over the recent filings of Special Counsel John Durham. While the media has largely buried or downplayed the alarming disclosures by Durham on the origins of the Russian conspiracy claims, Durham keeps adding new details implicating top Democratic figures in what he describes as an ongoing investigation. You can only hold your breath so long and Durham shows no signs that he is done by a long shot.

The latest disclosures by Durham are difficult for many in the media to cover because they directly refute years of prior coverage. Many in the media lampooned Donald Trump for claiming the FBI and the Clinton campaign spied on Trump Tower and his campaign. Yet, we later learned that the FBI did spy on the campaign. In 2020, the media largely ignored that finding.

Turley goes on, bold print for emphasis supplied: “There is no way to cover this story without many admitting that it facilitated a false narrative created by the Clinton campaign, including attacking those who suggested that the Clinton campaign would ever engage in such disreputable conduct.”

Interestingly, former Hawaiian Rep. Tulsi Gabbard -- a Democrat, no less -- stepped forward on Fox to note the real problem here. Then she tweeted this: “Durham probe further proves that the greatest threat to our democracy is not some foreign country, but rather the Power Elite, led by the likes Hillary Clinton and her cohorts in Deep State and Mainstream Media.”

Bingo. Three cheers for Ms. Gabbard. She is exactly right.

Recall that the media spent the bulk of the Trump presidency raving about Trump-Russia “collusion.” Or as Fox’s Tucker Carlson would mock: “Russia, Russia, RUSSIA!” Finally the Mueller report appears and reveals what most Americans of common sense not infected with Trump Derangement Syndrome knew from the beginning- the whole story was fiction. Made up. Fabricated.

Now comes the latest Durham filing and the reveal that, yes indeed, the Clinton Campaign really was spying on candidate Trump and then, later, President Trump -using  lefty techie experts to spread that “inference” and “narrative.”

And the media reaction? As Professor Turley quite accurately notes, “some media would rather ignore a major story than expose their role in covering it up.”

As my NewsBusters colleague Tim Graham accurately notes, in reaction to the Durham filing the first approach from the media was, just as Turley said, to ignore it. Simply pretend it did not exist.

And when that didn’t work as intended, the second approach was invented - trying to explain it away, the media littered with “journalists” (aka leftist activists) who served as “explainers.” Explainers who, in Tim’s words “attempt to hem and haw defensively through the whole business.”

Put it all together - the media collusion with the Clintonites, the flood of Trump-Russia collusion “stories” and the silence or “explainer” approach to the Durham filing - not to mention other episodes like the Big Tech banning of the New York Post’s Hunter Biden laptop scoop- and one sees exactly what Tulsi Gabbard means when she says that “the greatest threat to our democracy” …comes from “the Power Elite, led by the likes Hillary Clinton and her cohorts in Deep State and Mainstream Media.”

This problem is now way too serious to ignore.

….who is trying to federalize election laws in national elections contrary to the spirit of the Constitution? Who wishes to repeal or circumvent the Electoral College? Who wishes to destroy the more than 180-year-old Senate filibuster, the over 150-year-old nine-justice Supreme Court, and the more than 60-year-old, 50-state union?

Who is attacking the founding constitutional idea of two senators per state?

Exactly, and he he goes on with other examples. But his point is similar to Tulsi Gabbard’s. America has a real problem with “powerful elites” the Deep State and the “Mainstream Media.”

America has reached a dangerous inflection point with the  Mainstream Media -- aka the leftist media. It gins up stories that have not a shred of truth to them, and it suppresses stories that are, in fact, true. All done to advance the leftist agenda item of the moment.

The other day was the one year marker of the passing of Rush Limbaugh. It is worth recalling the fundamental role Rush played in breaking the leftist monopoly of the media, something that drives the left crazy to this day. Conservative media, which includes the publication you are now reading, exists - and it’s not going away.

Which is exactly why, in this latest case, the media is desperately trying to ignore the latest Durham findings, and getting angry at conservative media for spreading the news of just what Durham has found.

The conduct of the Mainstream Media in trying to suppress or ignore the Durham report brings up Victor Davis Hanson’s pointed question yet again:

“Who are the real insurrectionists?”

We know the answer.