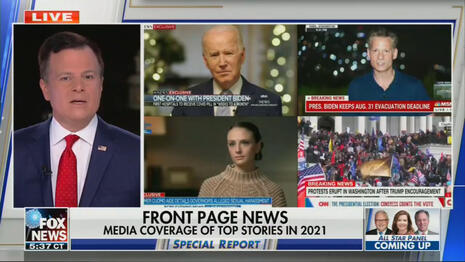 To borrow from the late President Gerald Ford, the state of the media as 2022 opens is not good.

Recall that Ford was happily sailing along politically in 1973 as the House Republican Leader in the Nixon era. He was the Kevin McCarthy of his day.

Out of the blue, in October, the Department of Justice revealed it was investigating Vice President Spiro Agnew on corruption charges. After much heated back and forth, Agnew resigned. Nixon, blessed with the constitutional authority to appoint a replacement to be confirmed by the Congress, appointed the popular Ford as the new vice president.

Less than a year later, in August of 1974, Nixon himself was forced to resign, the Watergate scandal taking him out. Suddenly, Gerald Ford was the 38th president of the United States.

In January, it was time for Ford to deliver his first State of the Union address as president. He began by recalling his time as a freshman House member in 1949 and listening to then-President Harry Truman deliver his State of the Union Address. Ford recalled that Truman specifically said the State of the Union in 1949 was “good.” Now, after two major political scandals had roiled the country resulting in the resignations of both the president and vice president, Ford said of himself: “Today, that freshman member from Michigan stands where Mr. Truman stood, and I must say to you that the state of the union is not good.”

As noted in this space last week, one poll after another reveals the American people have simply lost trust in the media.

Over there in the last 2021 issue of The Wall Street Journal the paper’s editorial board had a similar take. The headline on the WSJ editorial was this:

The Conformity Crackup of 2021
From Covid lockdowns to crime and cops, the political-media consensus was wrong.

This was the year when the conformity that characterizes American politics and media was exposed for its mistakes as never before.

By conformity we mean the progressive political and media consensus that forms quickly around an issue and then reinforces itself no matter the competing arguments or new information. This isn’t a conspiracy in any formal sense; there are no organized calls or Zoom meetings.

This is about a shared set of political values and preferences that leads people to reach the same conclusions about an event. The reporters and commentators of the major progressive media—the Washington Post, Bloomberg, the Financial Times, The New York Times, the Atlantic, and more—all then reinforce what they now like to call the “narrative” of a story.

Politicians and the press feed the narrative with leaks and the stories they pursue—or, as important, what they don’t pursue. Disagreement is rare to nonexistent because the cost can be ostracism or lost careers.

On that last point the WSJ recalls that James Bennet, The New York Times opinion editor, lost his job because he had the audacity - the nerve! - to run an op-ed by Arkansas Republican Senator Tom Cotton that called for sending in the troops to control the riots in American cities after the murder of George Floyd.

And Bennet was not alone, either. Over at The Philadelphia Inquirer, senior editor Stan Wischnowski resigned because he had the audacity amidst the turmoil of burned buildings in the riots to suggest that buildings mattered too. The left-wing staff, like that at the Times, revolted and Wischnowski was out.

Not to be forgotten either is the 2020 resignation from the Times by Op-Ed staff editor and writer Bari Weiss. Weiss wrote a blistering resignation editor to publisher A.G. Sulzberger in which she said, among other things, this:

I was always taught that journalists were charged with writing the first rough draft of history. Now, history itself is one more ephemeral thing molded to fit the needs of a predetermined narrative.

…Rule One: Speak your mind at your own peril. Rule Two: Never risk commissioning a story that goes against the narrative. Rule Three: Never believe an editor or publisher who urges you to go against the grain. Eventually, the publisher will cave to the mob, the editor will get fired or reassigned, and you’ll be hung out to dry.

Add all of this up - the insistence on fact free left-wing narratives, the intolerance for dissent and more and quite clearly something is seriously amiss in the American media.

My old stomping grounds of CNN has had a particularly miserable year. L’affaire Cuomo, plunging ratings and, incredibly, not one but two producers facing legal woes for trafficking in pedophilia.

But it would be a mistake to think that CNN’s ratings problems are somehow those of CNN alone. The fact is, as all those polls about a lack of trust in the media across the board demonstrate, the state of the media as 2022 begins is not simply not good - it's miserable.

The question now is: can the mainstream media find its way back into the trust and good graces of the American people?

The thought here is that the answer, sadly, is a “no.” Why? Because well beyond the media, one institution after another - it could be sports (the NFL, the NBA, the MLB), academia, the legal profession, organized religion (think Mainline Protestant churches) and more are all consumed by the same problem. They are about the fashionable liberal narrative of the moment rather than what they are, in reality, supposed to be about, whether its playing football, basketball or baseball, prosecuting criminals, practicing religion or teaching kids.

Without doubt, 2022 looks to be a chaotic, wild political year. As the recent Virginia elections illustrated vividly, Americans are not happy with the leadership of their country.

And without a doubt that includes a serious unhappiness with the American media.