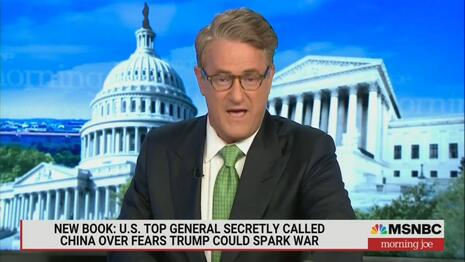 That eye-rolling question from MSNBC’s Joe Scarborough was typical of the liberal media’s reaction to the news that General Mark Milley, the Chairman of the Joint Chiefs of Staff, had called his Chinese counterpart to tell him that if then-President Donald Trump were about to launch a nuclear attack on China, he -- self-important Mark Milley -- would call the Chinese General to warn him.

To answer Scarborough’s question? It is perfectly true that generals from different countries talk to one another from time to time. But it is unbelievable that Joe Scarborough or any media figure thinks it’s OK for the American Chairman of the Joint Chiefs of Staff to call his Chinese (or Russian or North Korean or Cuban) counterpart to advise him he will be notified ahead of time of any impending U.S. attack or military action. That is decidedly not normal.

To put this in a historical context, can you imagine the Allied commander on June 5, 1944 -- that would be General Dwight D. Eisenhower -- picking up the phone to tell German Field Marshal Gerd von Rundstedt, supreme commander of the German troops in Western Europe, that the Allies are invading France the next day? And oh by the way, the Allies have also decided on landing in Normandy instead of Pas de Calais, where the English Channel is narrower -- and where the Germans expected them to land. Then suppose Ike also told von Rundstedt that President Franklin Roosevelt needed a military success before the 1944 election so the invasion of France had to be done the next day.

That is ridiculous on the face of it. Had that actually happened and the news went public, the American media of the day would have been baying for Ike’s head. 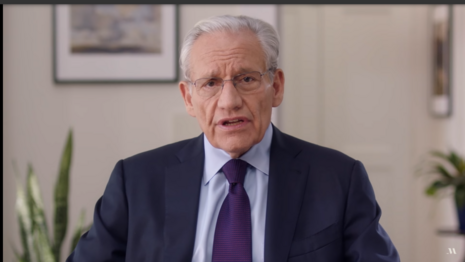 Yet Bob Woodward reports that General Milley does his version of this, which has already launched a chorus of politicians and military types angrily demanding his head --some specifically charging treason --  Joe Scarborough and his liberal media buddies rush to Milley’s defense.

Again, if Ike had done that, whatever happened afterwards one can be fairly certain he would never have kept his job, much less  later be elected president himself in two popular landslides. There would be too many angry, grieving Americans who would have believed that they lost their son or husband or brother on D-Day because of Eisenhower’s treacherous actions - and treason would indeed be the headline of the time.

But as with Joe Scarborough, other liberals in the media are quick to celebrate Milley’s blatantly unconstitutional actions because, as always, Trump Derangement Syndrome reigns.

For a little perspective, Substack’s Glenn Greenwald changed the story a bit, tweeting this:

“Imagine if, in 2011, a right-wing General called Gaddafi and said: ‘Obama wants to bomb your country and usher in regime change against you even though the House voted *against* its authorization. I give you my word I'll let you know what he's planning & stop him from bombing.’”

The Obama-loving media would have - rightly - gone through the roof and eviscerated such a General.

Fox News headlined exactly what is really now afoot in the media with the revelation about Milley. The Fox headline:

Several reporters and Democrats rushed to defend Chairman of the Joint Chiefs of Staff Gen. Mark Milley's action of contacting his Chinese counterpart about concerns with then-President Trump.

In truth? To say “reporters and Democrats” is redundant.

And there they are in the Fox story. Journalists from NBC, MSNBC, CNN, Bloomberg and more praising an American General for willfully ignoring the civilian elected president, completely ignoring the chain of command as laid out quite plainly in the US Constitution.

Fox News ran a second story on the media’s praise for Milley.  That headline:

Cited by name was MSNBC’s Mike Barnicle, with Fox quoting him thusly:

“This is just common sense," Barnicle said. "It's called public safety. And certainly you can make a strong case during the conclusion of the former guy's presidency, there were a lot of people, both in the House and the Senate on both sides of the aisle, Republican and Democrat, worried specifically about what we've just been talking about here for the last few minutes.”

“Watching liberal media stars spend 5 years trying to thread the needle between ‘we are so grateful to the unelected but noble Generals thwarting Trump’ and ‘only insane conspiracy nuts believe the US has a Deep State’ has been quite dizzying.”

To emphasize his point, Greenwald took a second swing at Scarborough and the rest:

“The other bizarre aspect of the last 5 years was watching these same liberal media figures prance around as defenders of ‘norms’ and ‘democratic values’ while simultaneously swooning over every unelected military/intel official who purposely impeded or sabotaged Trump's policies.”

Exactly.  An uncomfortable truth of this moment in American media history is that liberal media simply doesn’t believe in the very Constitution that gives themselves a guarantee of a free press. To them the Constitution and the democratic values it exemplifies are situational.

And what happens if some future General - or a President - decides to take a page from Milley’s playbook and tries to suspend a network or a newspaper because they think the content aired or published is coming from network executives, editors and reporters the General or President believes are “unstable” or “unhinged”, as Milley was said to believe of Trump? Suddenly there would be self-righteous cries of indignant outrage from those in the media who are now General Milley’s cheerleaders.