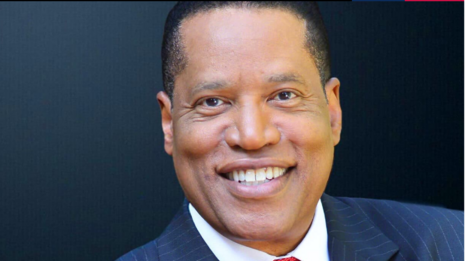 The popular radio host Larry Elder is running a serious campaign for Governor of California against Democrat Gavin Newsom. By all reports he stands a real chance of winning the recall race that was launched by widespread opposition to Newsom’s actions in office.

The problem? Elder is….oh the horror….both black and a conservative. Which called out one Erika D. Smith, a columnist in The Los Angeles Times, to play the race card...hard. As noted by NewsBusters editor Tim Graham, Smith wrote this:

It’s not just that Elder would be a Trump fanboy Republican trying to run a state dominated by Democrats. Or that he has zero experience in elected office and clearly doesn’t have the temperament for governance. (He can’t even take questions from journalists without losing his cool.)

It’s that — perhaps out of spite or perhaps out of an insatiable need for attention — Elder opposes every single public policy idea that’s supported by Black people to help Black people...Indeed, his candidacy feels personal. Like an insult to Blackness.

He is a danger, a clear and present danger,” said Melina Abdullah, cofounder of Black Lives Matter Los Angeles…

Black people know better than anyone how dangerous Elder is. He is the OG troll that no one was supposed to feed. But here we are.

But as [state Sen. Sydney] Kamlager said, “I’m not interested in going back to Jim Crow because I want to have a Black person as governor.”

This wasn’t the only racial shot at Elder in The Times. Another columnist in the paper, Jean Guerrero, compared him to, yes, the white Ku Klux Klansman David Duke.

If this were just about Larry Elder one could just roll one’s eyes and move on. But America has been here before -- repeatedly.

Does the name Clarence Thomas ring a bell? When Justice Thurgood Marshall, the first African-American on the U.S. Supreme Court, appointed by LBJ,  announced his retirement in 1991, the call went out from liberals and black leaders at places like the NAACP that this was the “black seat” on the Court. There must be a black nominee to replace Marshall, they insisted. President George H.W. Bush was called on to name an African-American. He did.

But when Judge Clarence Thomas’s nomination was announced the Left went crazy. The left-wing media of the day attacked him in major league fashion with a much publicized and unsubstantiated accusation of sexual harassment from ex-staffer Anita Hill. Thomas, with the television cameras zeroed in on him as he gave his response, memorably turned the tables by accusing his left-wing opponents of a “high tech lynching for uppity blacks” who dared to disagree with liberal dogma.

“Do I have, like, stupid written on the back of my shirt? I mean come on. We know what this is all about. People should just tell the truth: 'This is the wrong black guy; he has to be destroyed.' Just say it. Then now we're at least honest with each other. The idea was to get rid of me. And then, after I was there, it was to undermine me."

As recently recounted in Tucker Carlson’s new book The Long Slide, when Tucker questioned Simon & Schuster -- his own publisher -- about the Owens decision he was told “That’s between the author and the publisher. We’re not going to comment.” Tucker believed, correctly I would suggest, that the fact that Owens was both black and conservative made her a target at the left-wing publishing house.

Recall as well the tale of Diamond and Silk, African-American sisters Lynette Hardaway and Rochelle Richardson. They are famously Trump supporters and conservatives. And like clockwork their very popular broadcasts were summarily removed from Facebook. Why? Here was the message they received from Facebook:

“The Policy team has came to the conclusion that your content and your brand has been determined unsafe to the community. This decision is final and it is not appeal-able in any way.”

Got that? To be black and conservative “has been determined unsafe to the community.”

And back there in the ancient time that was 2015, there was this headline about Dr. Ben Carson in Newsmax.

Blacks Attack Carson for Being Conservative

The story about the black Dr. Carson by the black business and media executive Clarence McKee said this:

Pulitzer Prize-winning black columnist Cynthia Tucker is one of the first black liberals to attempt to politically lynch Dr. Ben Carson because his political views are out of tune with the black liberal Democratic chorus.

In a recent column, forced to admit the truth about Carson’s ‘brilliant’ career as a pediatric neurosurgeon and his “awe-inspiring tale of a poor black boy in Detroit who overcame daunting obstacles,” she proceeded to mercilessly plunge the dagger of political correctness into his back.

"But the good doctor's foray into Republican presidential politics threatens to become his epitaph, to overshadow — perhaps even to overwhelm — his academic and surgical accomplishments. He will likely be remembered as the GOP's latest black mascot, a court jester, a minstrel show.’”

If you are black - and conservative - the American Left will go after you. What’s happening to Larry Elder in The Los Angeles Times is exactly an attack from what Candace Owens calls the “Democrat plantation.”

If you are black, the demand in the liberal media and with left-wing activists is that you must be a liberal. You are not an individual entitled to your own beliefs. No, you are, exactly as Owens suggests, a slave on the Left’s political plantation.

This is why there are vitriolic attacks on Larry Elder in The Los Angeles Times. It was the reason for the assaults on Clarence Thomas, on Owens herself, on Diamond and Silk and on Dr. Ben Carson.

All of which suggests The Los Angeles Times, not to mention columnists Erika D. Smith (an African-American) and Jean Guerrero should be ashamed for playing the race card.

But they won’t be. They are part of the crowd whose self-assigned tasks is to keep blacks on, as Owens correctly calls it, “the Democrat plantation.”

Larry Elder has long since walked off the plantation. And proudly. Good for him.