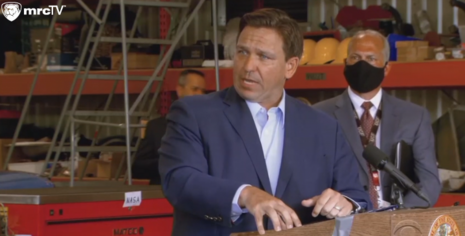 As Ronald Reagan might say, “there they go again.”

The “they” in this case would be 60 Minutes, the longtime jewel of CBS News. The show has been in the headlines for days because of a showdown with Florida’s Republican Governor Ron DeSantis and 60 Minutes correspondent Sharyn Alfonsi.

The crux of the tale is Alfonsi suggesting in a press conference to the Governor that Publix, a popular and located-everywhere store in Florida, received a contract to administer the vaccine because it was a $100,000 contributor to DeSantis.

The problem? Democrat elected officials rushed to defense of the Governor, as seen in this Fox News headline:

The story by Fox’s media reporter Joseph Wulfsohn says this:

One of the prominent Florida Democrats who has spoken out against the controversial 60 Minutes report targeting Florida Republican Gov. Ron DeSantis is shedding light on what exactly he told CBS News.

Moskowitz wasn’t the only Democrat official coming to the Governor’s defense.

So let’s put aside the political talk of how this helps or hurts the Governor, who has not been shy about fighting back in Trumpian style with CBS.

This is, among other things, a debacle for CBS.  It is a serious journalism or media story. Another Fox media watchdog, Brian Flood, took note of the reaction over there at the liberal Poynter Institute, whose business is studying and reporting on the media. Flood’s headline:

Poynter Institute scolds ’60 Minutes’ for controversial DeSantis report: ‘There was really no there there’

'This was not one of the show’s finer moments,' Tom Jones wrote

In the world of the liberal mainstream media, that would be an “ouch!” moment. Said the Flood story:

The Poynter Institute for Media Studies has joined the growing chorus of criticism against the controversial 60 Minutes report that suggested Florida Gov. Ron DeSantis, R., engaged in a pay-for-play scheme with Publix over distributing coronavirus vaccines.

"There was really no there there," Poynter’s senior media writer Tom Jones wrote.

"’60 Minutes’ is the finest and most respected investigative journalism show in the history of television … that doesn’t mean it’s infallible," Jones wrote. "And a sloppy moment on Sunday’s show is raising serious concerns."

Got that? 60 Minutes was “sloppy” and raised “serious concerns.” Now, what is really going on here? Recall that for years Fox’s Sean Hannity has been saying this: “Journalism in this Country is Dead.”

A mere seconds-long Google and there is Sean being quite specific on the subject, in this case back in 2019 when he is focusing on the media’s coverage of the Jussie Smollett scandal and the massive media lie that was the coverage of the Covington kids, student Nicholas Sandmann and the confrontation that happened on the steps of the Lincoln Memorial when a left-wing activist and Native America confronted an unsuspecting young Mr. Sandmann - only to have major media --- falsely --- present Sandmann as the aggressor.

Add in media coverage of the bogus Trump-Russia collusion business and more, and time after time after time what one is really seeing is mainstream journalists so obsessed with pushing their left-wing agenda of the moment that they are utterly heedless of how self-damaging they are to their profession.

What has unfolded here with this 60 Minutes DeSantis episode is but merely the latest episode of all this. The phony “pay-to-play” story is Jussie Smollett is Nick Sandman is Trump/Russia is…well, the list goes on and on and on.

On Thursday of this past week, April 8, yet again this point was being driven home, this time by this fresh headline and story in The Daily Caller.

Poll: Nearly Half Of Americans Do Not Trust Media Due To Bias

“48% of Americans do not trust any media sources to deliver them unbiased news, according to a new poll.

That number is up ten percentage points from the end of 2020, according to Civic Science. Civic Science polled 331,665 Americans between Jan. 1 and March 31.

The Daily Caller story links to a January 21 story from Axios. That gem headlines this: "Media trust hits new low."

“Axios begins the piece saying this:

“Trust in traditional media has declined to an all-time low, and many news professionals are determined to do something about it.

Why it matters: Faith in society's central institutions, especially in government and the media, is the glue that holds society together. That glue was visibly dissolving a decade ago, and has now, for many millions of Americans, disappeared entirely.

By the numbers: For the first time ever, fewer than half of all Americans have trust in traditional media, according to data from Edelman's annual trust barometer shared exclusively with Axios. Trust in social media has hit an all-time low of 27%.

56% of Americans agree with the statement that "Journalists and reporters are purposely trying to mislead people by saying things they know are false or gross exaggerations.”

58% think that "most news organizations are more concerned with supporting an ideology or political position than with informing the public.”

When Edelman re-polled Americans after the election, the figures had deteriorated even further, with 57% of Democrats trusting the media and only 18% of Republicans.”

The bottom line here? This 60 Minutes episode it is doubtless fairly easy to predict, will be seen by millions of Americans --- yet again for the umpteenth time ---  as just one more vivid example of a corrupt mainstream media. A media so devoted to its left-wing talking point of the moment (nailing rising GOP star DeSantis, in this case) that they are utterly heedless that they have just managed to shoot themselves in the foot - yet again.

And here’s a prediction: it will keep happening.