Tucker Carlson vs. The 'Journalistic Tattletale and Censorship Industry'

As detailed here by NB’s own Clay Waters  and also by Nicholas Fondacaro, Lorenz recently tweeted:

For international women’s day please consider supporting women enduring online harassment. It’s not an exaggeration to say that the harassment and smear campaign I’ve had to endure over the past year has destroyed my life. No one should have to go through this.

Fox’s inimitable Tucker Carlson saw the tweet and had the nerve…the nerve!…to mock the tweet and its author. This so upset The New York Times that it put out this statement:

“In a now familiar move, Tucker Carlson opened his show last night by attacking a journalist. It was a calculated and cruel tactic, which he regularly deploys to unleash a wave of harassment and vitriol at his intended target.

Taylor Lorenz is a talented New York Times journalist doing timely and essential reporting. Journalists should be able to do their jobs without facing harassment.” 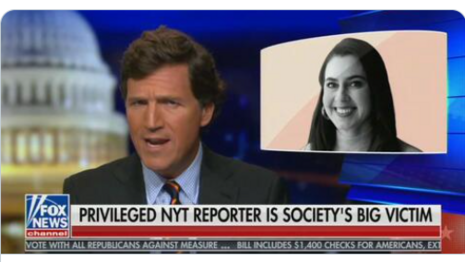 One doesn’t know whether to laugh at the ridiculous Lorenz tweet or The Times statement. It is The Times itself, not to mention all manner of left-wing television and print/Internet outlets that routinely “unleash a wave of harassment and vitriol” at Tucker. The Times loves to write articles reporting on Tucker advertisers who have been intimidated by leftists into leaving. It has outright lied in saying that he “derides immigrants.” On and on go the attacks. Even on his home, with his wife quivering inside.

Taylor Lorenz could not begin to imagine the assaults. But in fact, what Lorenz and others at The Times are really about is censorship. And Tucker Carlson has the common sense not to put up with the oozing sense of victimhood from privileged elites who have self-appointed themselves as hall-monitors.

Note well The Times statement that Lorenz is doing “timely and essential reporting.” Suffice to say there are real journalists out there who beg to disagree. Glenn Greenwald on Substack wrote an article headlined "The Journalistic Tattletale and Censorship Industry Suffers Several Well-Deserved Blows."

A new and rapidly growing journalistic “beat” has arisen over the last several years that can best be described as an unholy mix of junior high hall-monitor tattling and Stasi-like citizen surveillance. It is half adolescent and half malevolent. Its primary objectives are control, censorship, and the destruction of reputations for fun and power. Though its epicenter is the largest corporate media outlets, it is the very antithesis of journalism.

I’ve written before about one particularly toxic strain of this authoritarian “reporting.” Teams of journalists at three of the most influential corporate media outlets — CNN’s “media reporters” (Brian Stelter and Oliver Darcy), NBC’s “disinformation space unit” (Ben Collins and Brandy Zadrozny), and the tech reporters of The New York Times (Mike Isaac, Kevin Roose, Sheera Frenkel) — devote the bulk of their “journalism” to searching for online spaces where they believe speech and conduct rules are being violated, flagging them, and then pleading that punitive action be taken (banning, censorship, content regulation, after-school detention). These hall-monitor reporters are a major factor explaining why tech monopolies, which (for reasons of self-interest and ideology) never wanted the responsibility to censor, now do so with abandon and seemingly arbitrary blunt force: they are shamed by the world’s loudest media companies when they do not.

…The profound pathologies driving all of this were on full display on Saturday night as the result of a reckless and self-humiliating smear campaign by one of The New York Times’ star tech reporters, Taylor Lorenz. She falsely and very publicly accused Silicon Valley entrepreneur and investor Marc Andreessen of having used the “slur” word “retarded” during a discussion about the Reddit/GameStop uprising.

Lorenz lied. Andreessen never used that word. And rather than apologize and retract it, she justified her mistake by claiming it was a “male voice” that sounded like his, then locked her Twitter account as though she — rather than the person she falsely maligned — was the victim.”

Got that? Well before Tucker Carlson said a word about Lorenz, there is Glenn Greenwald noting not only what she is really all about and also noting her claim to victimhood.

What Lorenz is really about, as a number of real journalists have noted, is “hall-monitor journalism.” And to criticize what she does is “harassment.”

This would be seriously amusing if it weren’t so dangerous. Lorenz - not to mention The Times itself - has made it their individual and collective job to invade the privacy of all manner of people out there in their private Internet warrens.

As Clay Waters has noted, and Taibbi has picked up on:

The subtext isn’t hard to decipher. These people believe bad-think, left unaddressed, results in Donald Trump being elected. Therefore, as Chen and Roose put it in a chat last week, it’s “problematic” to countenance platforms that allow large numbers of people to assemble in non-monitored, “shadow” social networks, where they can spread “misinformation” and wreak, potentially, a “ton of havoc.” Countless stories have been written on the theme of what speech should be “allowed,” as if they are the ones who should be doing the allowing.

What is clearly obvious here is that Tucker Carlson touched a nerve in calling out Lorenz for playing the victim when she has made it her job to investigate all manner of people in the tech world for, as Taibbi says, “unapproved thought.”