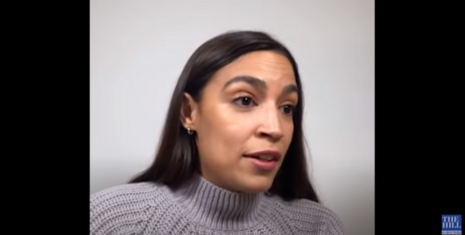 Congresswoman Alexandria Ocasio-Cortez recounts being in her office minding her own business when the Capitol riot breaks out. Quickly she races for the office bathroom. She falls silent, terrified as a male voice yells “Where is she?”

I confess the thought crossed my mind…was she even in the Capitol? In the long ago and far away my first Washington job was working as a press secretary and then legislative director for a Pennsylvania congressman. I became extremely familiar with all three House office buildings - Cannon, Longworth and Rayburn.

All named for former Speakers of the House. If there is one thing I learned it was that the only Members of the House who have offices in the U.S. Capitol are the House Leadership of both parties and very senior, been-there-for-decades Members. Ocasio-Cortez fits none of those categories. Ergo, she had no Capitol office in which to hide.

To say as Ocasio-Cortez  did that she shut herself in her office bathroom had to mean only one thing - she was not in the Capitol building where the assault was taking place. Sure enough, she was outed by South Carolina Republican Congresswoman Nancy Mace. Fox News reported this:

‘I deal in facts and reality. And the fact is there were no insurrectionist, no violent rioters that were in the halls of the Cannon Office Building that day,’ said Mace, whose office is down the hall from Ocasio-Cortez. ‘Everyone was terrified. We were worried. It was a harrowing, life-threatening experience. No one questions that. But when we get into the details and the facts and let that slide, that that did not happen, that's where I take issue. We need to be honest or people tell the truth and deal in reality and facts.’

According to Mace, this is far from the first time that Ocasio-Cortez has tried to use a situation for political purposes.

Then there’s the small matter of Texas Senator Ted Cruz reaching out to AOC in agreement on the GameStop/Wall Street issue to be greeted with this response: “You almost had me murdered 3 weeks ago.”

The New York Times has quickly rushed to Ocasio-Cortez ’s defense, with Maggie Ambrose writing this:

“Since Representative Alexandria Ocasio-Cortez, the New York Democrat, took to Instagram Live on Monday to describe what the Jan. 6 riot was like from inside the Capitol complex, critics have claimed that she wasn’t where she said she was, or that she couldn’t have experienced what she described from her location.

These claims are false.”

Mace, it should be repeated, was just two doors down. In the same Cannon office building.  Ambrose was not there. And as Tim Graham has reported here the “fact checker” site Snopes rushed to Ocasio-Cortez’s defense as well, making time to smear Ben Shapiro’s Daily Wire for factually reporting the truth.

And oh yes, one reads the Ambrose article from start to finish and there is not a single mention of the Democrat's blatant lie that Ted Cruz almost had her murdered. Call it journalism by omission.

Okay. Full stop. Let’s shift to another Times column, this one by technology columnist Kevin Roose. The headline:

How the Biden Administration Can Help Solve Our Reality Crisis

These steps, experts say, could prod more people to abandon the scourge of hoaxes and lies.

In which Mr. Roose proposes as follows:

“I’ve spent the past several years reporting on our national reality crisis, and I worry that unless the Biden administration treats conspiracy theories and disinformation as the urgent threats they are, our parallel universes will only drift further apart, and the potential for violent unrest and civic dysfunction will only grow.

Several experts I spoke with recommended that the Biden administration put together a cross-agency task force to tackle disinformation and domestic extremism, which would be led by something like a “reality czar.”

The other night in his monologue, Fox’s Tucker Carlson reminded of some history I can actually remember. That would be the November 22, 1963 assassination of President John F. Kennedy in Dallas, Texas. As Tucker quite accurately reminded, JFK’s assassin was a dedicated Marxist, Lee Harvey Oswald. Oswald had been to Russia, married a Russian, finally returned and tried and failed to defect. He became a fanatic defender of a pro-Castro group called “Fair Play for Cuba” and, it was eventually discovered, had earlier tried and failed to assassinate a retired right-wing U.S. Army general named Edwin Walker, a Dallas resident.

But with Oswald captured almost immediately, his far-left background and beliefs quickly discovered — the media of the day insisted on a different narrative altogether. According to the media of the day JFK was killed by, as the conservative Republican Arizona Senator Barry Goldwater noted in his memoirs, the “radical right.” So intense was this smear campaign, an utter untruth, that Goldwater wrote this:

“The Draft Goldwater Committee (for president) closed its Washington headquarters because of threats. (Texas Republican) Senator John Tower and his family moved out of their home to a hotel room because of phone callers who threatened their lives. Conservatives around the nation reported similar incidents.”

Hmmm. In other words? This business of ignoring “reality” — real facts — if they don’t fit a leftist narrative has been going on for decades.

If there were a reality czar then would AOC be summoned to testify about her disinformation? Had a “reality czar” existed in 1963, would those spreading the “right-wing kooks killed Kennedy” narrative have been summoned?

Which is exactly why the Roose proposal, not to mention Ocasio-Cortez’s own proposal for a “commission” to “rein in” the media, is so dangerous.

As Tim Graham pointed out in his column on Snopes, when confronted with a blatant untruth - or “disinformation” as the Left likes to say -

Snopes instantly retreated not to truth telling or “fact-checking." Nope. Quite predictably they resorted to “left-wing blogging.”

One doesn’t have to be a rocket scientist to see how Roose’s “reality czar” would work. If you are a left-winger you will be able to say anything you want, including making up stories out of whole cloth as Ocasio-Cortez just did both about what happened to her and about Ted Cruz.

And in doing so, The New York Times, not to mention any and every lefty media outlet on the job will quickly suppress the truth (as the Ambrose article suppressed the false charge about Cruz) or go out of their way to defend the untruth as not untrue and disinformation at all.

So thanks New York Times. In one quick instant you have illustrated exactly how the “reality czar” idea actually works in practice.