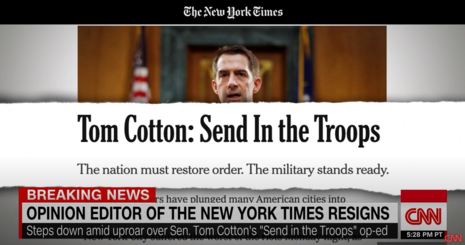 Over there at the History Channel is this short history of China’s “Cultural revolution” back there in 1966. It was, but of course, the brainchild of China’s Communist founder and leader Mao Zedong.  Here is a bit of the description, with bold print for emphasis supplied:

Mao launched the so-called Cultural Revolution (known in full as the Great Proletarian Cultural Revolution) in August 1966, at a meeting of the Plenum of the Central Committee. He shut down the nation’s schools, calling for a massive youth mobilization to take current party leaders to task for their embrace of bourgeois values and lack of revolutionary spirit.

The population was urged to rid itself of the “Four Olds”: Old customs, old culture, old habits, and old ideas.”

This comes to mind as one observes the turmoil that is increasingly gripping the so-called “mainstream media” or, as I call it, the “Leftist State Media” - the LSM.

The media’s “cultural revolution” moment has swamped The New York Times, The Philadelphia Inquirer, The Pittsburgh Post-Gazette and New York Magazine, liberal publications one in all, in controversies.

At the Times, as discussed in this space previously, the controversy erupted when The Times printed an op-ed from Arkansas Republican Senator Tom Cotton, calling for invoking the Insurrection Act of 1807 and having the President send in troops to restore order in various American cities that were being consumed by looting and rioting. As NewsBusters’s Curtis Houck reported here, Times staffers rebelled en masse. This resulted in the  resignation of James Bennet, the op-ed page editor. 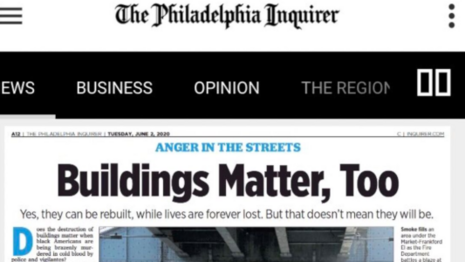 At the Inquirer, one of these Mao moments erupted when the paper’s top editor, Stan Wischnowski, wrote a column headed “Buildings Matter, Too.”  Some 40 journalists of color (as CNN reported) called in sick to protest. And of course, editor Wischnowski felt forced to resign.

Across Pennsylvania at The Pittsburgh Post Gazette, reporter Alexis Johnson, who is black, was pulled from covering the turmoil because of a sarcastic tweet comparing rioting in Pittsburgh to the mess left behind by the crowd at a Kenny Chesney concert. So too was a photographer, also black, pulled for tweeting support for Johnson.The paper’s staff erupted in anger at the editor, Keith Burris, with more than 80 staffers tweeting their outrage. They alleged that the two were pulled because they were black. As reported here in, of all places, the Times, the controversy mushroomed.

“The Newspaper Guild of Pittsburgh, the union that represents the paper’s staff members, called on readers to send letters demanding that Ms. Johnson and Mr. Santiago be allowed to cover the protests. By Tuesday afternoon, more than 4,400 letters had poured in, according to the guild. Letter writers have included Senator Bob Casey, Democrat of Pennsylvania, and the state’s lieutenant governor, John Fetterman.

More than 80 Post-Gazette staff members have taken the side of their sidelined colleagues in social media posts, the guild said.

…..The union also urged advertisers to take action. On Tuesday, the Allegheny Conference on Community Development, an economic development group, said it had withdrawn a full-page ad. “The ad was intended to show support for our Black neighbors and share the business community’s commitment to combating racism,” the group said in a statement. ‘The Post-Gazette was not the right vehicle for this message.’”

The outraged editor of The Post-Gazette, Keith Burris, was incensed, and penned this detailed response pointing out what would seem obvious - the reporter and photographer were pulled because they had made a point of making their opinions known, not because they were black. Editor Burris clearly had the strange and antiquated belief that reporters should not have a bias about the stories they cover. Imagine that.

Then there is New York Magazine, another liberal publication. (And full disclosure, the magazine did a profile on me last year, which I certainly thought was fair.) New York publishes Andrew Sullivan, the expatriate British Conservative who long ago morphed into an early champion of gay rights and was an enthusiastic Obama supporter. But apparently Andrew had a dim view of riots, looting and burning. And so? Like clockwork, the magazine refused to let him write his column.

What is playing out at these publications is nothing less than the Mao Maoing of the media by far left, intolerant leftist activists. And some of them with a discernible elitist racism at play. Obviously, no one is being killed by these journalistic outlets, but the ideas of diversity of thought are being silenced.

Take the furor at The Philadelphia Inquirer over the “Buildings Matter, Too” column. Apparently the elites at The Inquirer are unfamiliar with Lucy Hosley. Lucy, a black woman, is a part owner of Valentine’s Deli in New York City. And a few days ago her deli  - a building - was looted. As reported in The New York Post, a furious Lucy posted this video, which quickly went viral. The Post story says:

“A black store owner ripped looters for destroying her Bronx shop this week — telling them in a viral video to “get a job” and stop stealing.

‘We’ve been here all night cleaning up. [They] tell me ‘Black Lives Matter.’ They’re lying,’ said Lucy Hosley, 69, outside Valentine Deli in a video posted to YouTube Tuesday after the raid earlier that morning.

‘You wanted to loot the store. You needed money. Get a job like I do. Stop stealing.’

In the video, debris and broken glass can be seen on the sidewalk outside the Valentine Avenue deli.

‘You said Black Lives Matter — why don’t you choke me?’ railed Hosley, who has co-owned the business for six years. ‘I’m black, look what you did to my store.’

‘This is our neighborhood. We’re trying to build it up and you tear it down,’ she added.”

Then there was this building in New York - a mosque. As reported by CBS New York, the mosque was located over a grocery store - and both were gutted by fire and looting. Prayer services at the mosque were just about to end when all hell broke loose. Prayer books and everything else inside the building were destroyed. A heartbroken Smuglz Hussein, the president of the mosque, said: “We are helpless. We are in the street now.”

“We are in the street now” is another way of saying “Buildings Matter, Too.”

But hey, if you’re a woke staffer at The Philadelphia Inquirer, you could care less about what Lucy Hosley’s deli and Smuglz Hussein’s mosque meant to them. They needed and loved their buildings - but hey. Who cares if they are black or a Muslim? Again, said Lucy Hosley on the importance of her building to her: “I’m black, look what you did to my store.” Obviously, the woke staff of The Philadelphia Inquirer could care less.

The hard fact here is that the intolerance of the cultural revolution that has long ago swept American college campuses is now spreading inside the newsrooms of America’s “mainstream media.” The “Red Guards” of the Leftist State Media, like the Red Guards of the original Chinese cultural revolution, are turning on their journalistic elders, attacking their colleagues for their “bourgeois values and lack of revolutionary spirit” and demanding they get rid of the “Four Olds: Old customs, old culture, old habits, and old ideas.”

In this case, that would mean getting rid of America’s culture of a free press and free speech.

In other words? What we have witnessed at The New York Times, The Philadelphia Inquirer, The Pittsburgh Post-Gazette and New York Magazine is nothing less than the Mao-Maoing of American journalism.

And it has only begun.