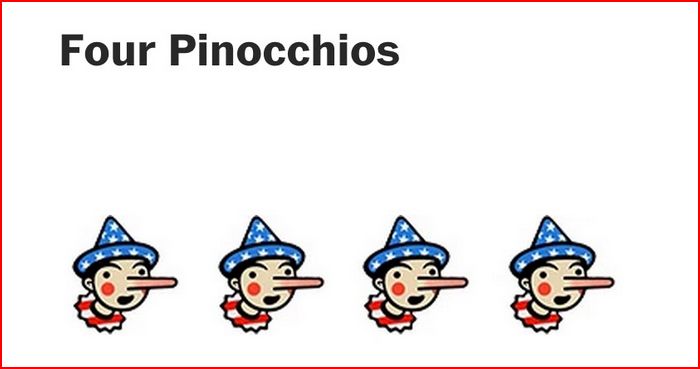 “Trump has claimed twice, without proof, that Clinton lacks the physical and mental stamina to be president. In the absence of any evidence, he earns Four Pinocchios.”

Kessler’s article then gets picked up by the Post’s Callum Borchers, who breezily asserts:

“The Washington Post Fact Checker last week awarded Trump (who is 70, by the way) four Pinocchios for his unsubstantiated "stamina" argument….”

Alas for Messrs. Kessler and Borchers, they appear not to have checked in with one of the most famous and informed reporters in the entire history of the Washington Post.  That would be one Carl Bernstein, famously of Nixon Watergate Woodward and Bernstein fame. Carl (full disclosure a CNN commentator colleague of mine) writes books these days, and way back there in the ancient time of 2007 wrote a great biography titled: A Woman in Charge: The Life of Hillary Rodham Clinton. And what do we find on page 313? This, bold print supplied by me:

"More than Bill, she was physically exhausted; she lacked his stamina and was losing weight. A newspaper story noted archly that Hillary 'looks thinner than ever, even though she confesses that her exercise regimen has gone the way of the middle-class tax cut since she moved into the White House.' On trips to the Hill, her aides noticed how she would perform perfectly during an appointment, then immediately afterward begin yawning and then collapse in the car on the way back to the White House.”

Say again, after a trip to Capital Hill “her aides noticed” that “then immediately afterward (she would) begin yawning and then collapse in the car on the way back to the White House.”

And there it is. The flat out statement as fact that way back there in 1993 the then-46 year old First Lady of the United States was seen by her aides as being “physically exhausted” by her duties, that she “lacked” her husband’s stamina and in fact was so exhausted by simple Capital Hill appearances that she would “collapse in the car on the way back to the White House.”

Hmm. Did Mr. Kessler the “Fact Checker” ever bother checking the reporting of one of the best reporters in the history of his own paper? Did Mr. Borchers? Obviously, not. So what we get instead from them both is the assertion that Donald Trump has lied with an “unsubstantiated ‘stamina' argument” about Hillary Clinton when in fact it has been very much substantiated by Carl Bernstein who got the information from Hillary Clinton’s own staff members.

This is the kind of horse hockey that passes as “fact checking” today. It is called “fact checking” when in fact it is nothing more than one more set of factual misstatements coming from a virulently anti-Trump paper. A paper that has, no kidding, said this on its editorial page about Trump: “Mr. Trump is pathologically dishonest and morally bankrupt.”

Today, of course, Hillary Clinton is no longer 46 years old. She is about to turn 70. Logic dictates that a person who had stamina problems at 46, by the account of her own staff,  would have even more stamina problems a full 23 years later. Yet, with the fact of her stamina problems fully evident in a biography by one of the most respected and well-known journalists of the day - and, I might add, no conservative - the media not only totally ignores.

Trump's stamina attack on Clinton stirs talk of gender bias (+video)
Intent on undermining his Democratic rival, Trump is increasingly relying on rhetoric that some say has an undeniable edge focused on gender.

Writes the AP in the CSM:

Intent on undermining his Democratic rival, Trump and GOP backers are increasingly relying on rhetoric that academics and even some Republican strategists say has an undeniable edge focused on gender.”

The New York Times picked up the ball headlining:

“The questioning of Mrs. Clinton’s energy levels comes as some of her conservative critics have been trying to push the narrative that she is battling an undisclosed illness that makes her unfit for the presidency. Last week, the Fox News host Sean Hannity devoted considerable time on Mrs. Clinton’s rumored medical problems. The right-wing Drudge Report has also prominently displayed images of Mrs. Clinton appearing to stumble and looking unwell.

Kathleen Hall Jamieson, a communications professor at the University of Pennsylvania, said that Mr. Trump appeared to be nodding to age and sex stereotypes of women being too frail to handle strenuous activities.

“He is playing into that loop of clips that Sean Hannity is playing,” Ms. Jamieson said. “What does it mean that she’s not up to it? It could be ‘she’s a woman and you know what happens when a woman gets older.’”

In other words? This time not only is the stamina issue gender bias - sexist -  but it’s all a put up job by Sean Hannity and Matt Drudge.

Over at the late Gawker, now gone with the wind of a massive lawsuit that forced it to shut its doors, the headline was:

Trump’s “….fixation on Clinton’s energy—down to theorizing about when and where she sleeps—is a high-pitched dog whistle aimed at the sort of people who read Republican-interest publications ranging from crypto-conspiracy Bibles like World Net Daily and The Drudge Report to more “mainstream” right-wing websites like The Daily Caller and Breitbart.”

But wait! Over at Politico, there is a report on former Hillary campaign manager Patty Solis Doyle telling former Obama aide David Axelrod (and full disclosure both Patty and David are CNN colleagues of mine) on his "The Axe Files" podcast (done for the University of Chicago Institute of Politics) the following, bold emphasis supplied:

“You know, Bill Clinton, he gets so much energy from the people at his rallies. When he’s working a rope line, you can just see him light up. You know, she’s tired. She gets tired. She does it. She does it dutifully. Is it her most fun thing to do? No. Would she rather be looking at policy and going through legislation and working with a bunch of experts on how to, you know, improve the Affordable Care Act? Absolutely," Solis Doyle explained. "This is not her favorite thing to do. It’s a mean, you know, to an end, I guess.”

In other words? In other words what Solis Doyle is saying in 2016 is exactly the same thing Carl Bernstein reported in his 2007 biography. Simply put: Hillary Clinton does in fact have a stamina problem. She is also highlighting something else. By saying that Bill Clinton "gets energy from people at his rallies" - and Hillary doesn't, but instead gets it from hanging with policy wonks, this is an inadvertent admission that Bill Clinton likes people - while Hillary Clinton likes to rule.