They are calling him the “Teflon Don.” That would be, of course, Donald Trump. Winner -- by a lot -- of the New Hampshire and South Carolina Republican primaries plus the Nevada caucuses, not to mention a serious second in Iowa’s caucus.

Then there was the “Teflon President.” That would be Ronald Reagan. Reagan whose frustrated if not more than occasionally frothing opponents in both the GOP Establishment, the Democratic Party and most certainly in the liberal media could not understand for the life of them why a candidate and president they saw as extreme, ignorant, possibly racist and a decided simpleton never seemed to be touched by what they saw as his glaring deficiencies. 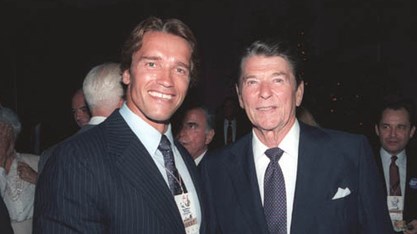 Not to be forgotten here is Arnold Schwarzenegger. The man whose candidacy for governor of California absolutely flummoxed opponents. Baffled at the notion that a man who began his career as an Austrian immigrant with a supposedly Hitler-admiring father, a man given to quite on-the-record use of the “F-bomb” and all kinds of well-chronicled sexual adventures, could even possibly be considered to be governor of America’s largest state, let alone elected twice by a margin of more than 17 points.

The success of Donald Trump’s presidential campaign thus far -- against a field of Republican candidates that has included multiples of sitting and former governors, three US Senators, a world renowned surgeon and a seriously successful businesswoman - all of them collectively ranging from conservative to moderate on the ever-important GOP philosophical scale - has, it is very safe to say, left both Trump’s opponents in and out of the GOP, not to mention the media, slack-jawed.

They shouldn’t be. What Donald Trump, Ronald Reagan, Arnold Schwarzenegger and others - with names like Al Franken (of Saturday Night Live) , Sonny Bono (of Sonny and Cher), Fred Grandy (of The Love Boat) and Ben Jones (The Dukes of Hazzard) have in common is something that is as hard for their ordinary political opponents to understand as it is obvious.

Every one of these people entered their political careers as fixtures of American culture. Through the media of their time each and every one was known and known well to the various electorates to which they appealed for election. Trump and Reagan for president, Schwarzenegger for governor, Franken for U.S. Senator, and Bono, Grandy and Ben Jones for Congress.

All of them succeeded in their quests (although Grandy would eventually lose a race for governor of Iowa.)

The question here is: Why?

One would gently suggest to Trump’s fervent opponent’s that range everywhere from the GOP Establishment to conservatives to the liberals of the Washington Post, New York Times and Boston Globe editorial boards among other left-wing hot beds, that all of them are missing a very fundamental fact of American life.

Politicians of any and all philosophical stripes from right to left are - politicians. Nothing more, nothing less. They are quite open about it, they are presented and seen in that fashion, and politically speaking are always judged accordingly on a “normal” political scale. Do voters agree or disagree with politician X about the issues? Or most of them? Ditto the media, liberal and conservative media both. The liberal New York Times and Washington Post, not to mention the conservative Wall Street Journal, can open fire on, say, Texas Senator Ted Cruz -- and the reaction pro and con is assimilated by the voting public in the “its just the politicians again” mode of their brain.

This political rite of passage in America is always hazardous for a newcomer on the national scene, as, in the current case, Cruz and his original 2016 GOP candidate compatriots Rubio, Paul, Christie, Kasich, Walker, Perry,  Carson, Fiorina, Santorum, Huckabee, Bush, Gilmore, Pataki, Graham, Jindal decidedly were. Not a one of them had universal name recognition with the exception of Jeb Bush, and in his case the one-time governor of Florida had a famous last name - not a first one. Jeb Bush too was an unknown quantity to voters who only knew of his famous father and brother. 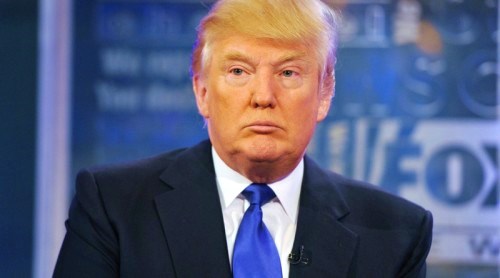 Such was not the case for Donald Trump. Like Reagan and Schwarzenegger before him, Donald Trump was one of the most familiar figures in American pop culture. A famous billionaire with a social life that was the very stuff of New York tabloids in the media center of the world, a television star with his name emblazoned on famous and glamorous real estate properties the world over, Trump has been famous since some of his rivals were literally school boys.

Reagan famously had spent a decades long career successively as a sports announcer, movie star and television host. His two marriages had been chronicled in the fan magazines of the day, and he had even acquired a popular nickname base on his portrayal of dying Notre Dame football hero George Gipp -- “The Gipper.”

So too was a version of this Schwarzenegger’s story as well. In the latter case Ahh-nuld was famous for the occasion four-letter expletive, his womanizing reputation, his muscles, real estate acumen and, most famously, his movie career as one of if not once the hottest action picture star in Hollywood.

The point is an obvious one. Such figures in American life, if they turn their hand to politics, have an incalculable advantage over there mere-politician rivals of all political stripes.  The larger American public knows exactly who they are. There is no “introduction” needed to voters. They already have a favorable - or even unfavorable - impression of the cultural figure turned politician.  Chances are at least even that they grew up with this person tucked away in their memory bank as he dominated one public medium after another.

The net political effect is equally obvious. While all the politician candidates labor to introduce themselves (“son of Cuban immigrants,” “Harvard law star,” “congressman-turned-successful-governor,” “libertarian,” “was a US Attorney who prosecuted bad guys,” and so on) there in the midst of all the pols stands one of the most familiar figures in American culture. Voters are dazzled. Negative ads against this cultural star are useless. They have acquired political Teflon.  The voters already know all the culture star’s hits, semi-hits and outright failures. The highs and the lows of this person’s life are known to one and all.

Which brings us to the point here.  In the fashion typical of the insular world of Washington politics - a world that cherishes political power, philosophy, legislation, executive orders, consultants, donors and more - no one took seriously that Donald Trump and the power of his cultural celebrity, twinned with the most important political issues of the day (illegal immigration and the feckless GOP Establishment to name but two) would be a massive political powerhouse. A political powerhouse so powerful that he could blow his politician opponents right out of the GOP nominating contest and, yes, actually win not only the GOP presidential nomination but the presidency itself.

America has quite decidedly been here before. The old movie actor scorned by both his Republican and Democratic opponents of the day now has his name permanently affixed to geographical Washington  - Reagan Washington National Airport greets travelers to the nation’s Capital and the Ronald Reagan Building bestrides Pennsylvania Avenue, the “Avenue of Presidents," right alongside memorials to the politician presidents from Washington, Jefferson and Lincoln to FDR and JFK.

As this is written a Trump hotel is preparing to open on Pennsylvania, a new version of the venerable Old Post Office Building. Affixing the Trump name right in the middle of the city mere blocks from the White House. By not taking Donald Trump seriously  -- as once Ronald Reagan and Arnold Schwarzenegger were once not taken seriously by their opponents --  by arrogantly dismissing the role of American cultural figures in American life who transfer their skills and celebrity to politics, the Washington political and media class may be on their way to ensuring more Trump monuments to come  in Washington. All of them celebrating an American president.