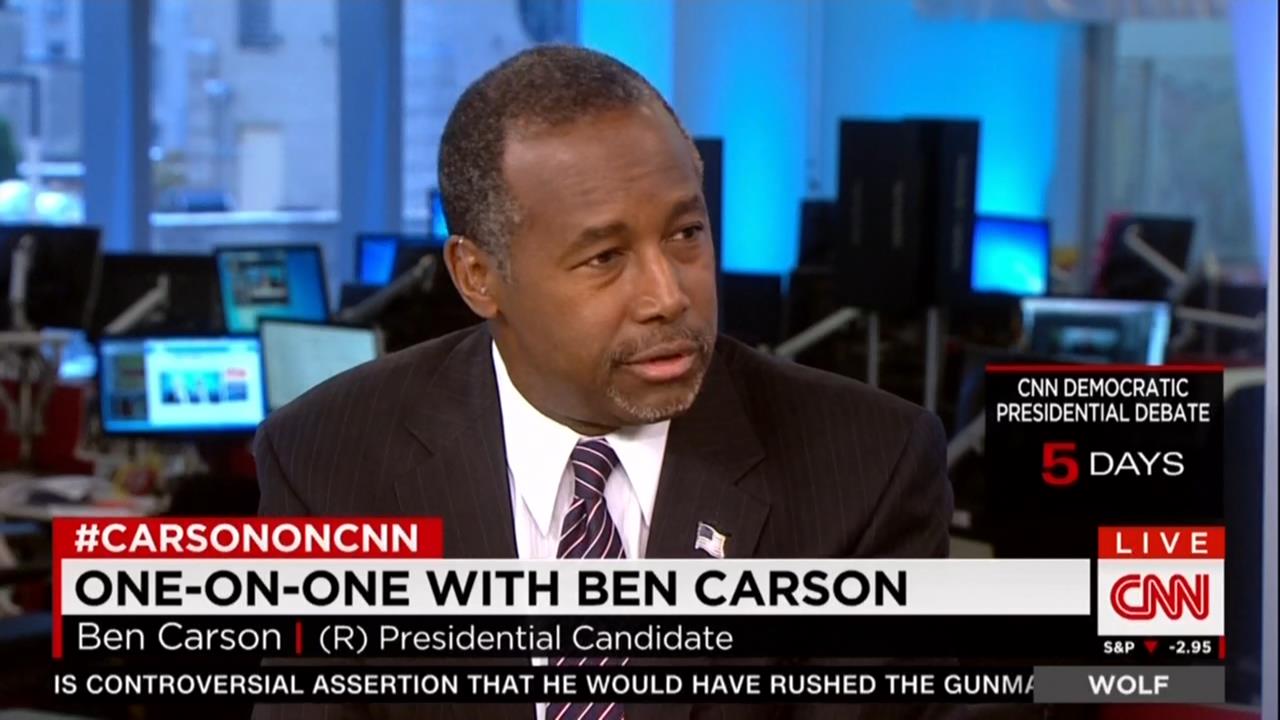 Another day, another media frenzy. This time the media is in a tizzy about Ben Carson’s simple answer to CNN anchor Wolf Blitzer’s equally clear question. Wolf asked Carson about a subject Carson has discussed before in reference to gun control. The Washington Post headlined it this way:

“Ben Carson said Thursday that Adolf Hitler’s mass murder of Jews “would have been greatly diminished” if German citizens had not been disarmed by the Nazi regime.

The comment, which came during an interview with CNN’s Wolf Blitzer, was similar to arguments Carson made following last week’s mass shooting at Umpqua Community College in Roseburg, Ore., in which he defended the Second Amendment and suggested that the victims should have fought the gunman.”

Well. Media firestorm to follow - immediately. From the Huffington Post to ABC  to Time and more (and more!) the liberal media was out there to dismiss Carson’s comments to Wolf Blitzer’s quite legit question as somehow as wacko as it was inflammatory. Even the Anti-Defamation League jumped in to say that Carson’s remarks were "historically inaccurate and offensive.”

One has to wonder, do all these media outlets have anybody working for them who is familiar with history? In fact, to the question of whether gun-toting Jews could have impeded Hitler the answer was long, long ago answered. And the answer is a decided yes.

Look no further to than to the United States Holocaust Memorial Museum  to get the facts. What Ben Carson is suggesting is known to history as the Warsaw Ghetto Uprising, which took place in Nazi-occupied Warsaw, Poland in 1943.

Let’s quote the Holocaust Museum exactly on the subject:

In response to the deportations, on July 28, 1942, several Jewish underground organizations created an armed self-defense unit known as the Jewish Combat Organization (Zydowska Organizacja Bojowa; ZOB). Rough estimates put the size of the ZOB at its formation at around 200 members. The Revisionist Party (right-wing Zionists known as the Betar) formed another resistance organization, the Jewish Military Union (Zydowski Zwiazek Wojskowy; ZZW). Although initially there was tension between the ZOB and the ZZW, both groups decided to work together to oppose German attempts to destroy the ghetto. ….While efforts to establish contact with the Polish military underground movement (Armia Krajowa, or Home Army) did not succeed during the summer of 1942, the ZOB established contact with the Home Army in October, and obtained a small number of weapons, mostly pistols and explosives, from Home Army contacts.

In accordance with Reichsführer-SS (SS chief) Heinrich Himmler's October 1942 order to liquidate the Warsaw ghetto and deport its able-bodied residents to forced labor camps in Lublin District of the Generalgouvernement, German SS and police units tried to resume mass deportations of Jews from Warsaw on January 18, 1943. A group of Jewish fighters, armed with pistols, infiltrated a column of Jews being forced to the Umschlagplatz (transfer point) and, at a prearranged signal, broke ranks and fought their German escorts. Most of these Jewish fighters died in the battle, but the attack sufficiently disoriented the Germans to allow the Jews arranged in columns at the Umschlagplatz a chance to disperse. After seizing 5,000-6,500 ghetto residents to be deported, the Germans suspended further deportations on January 21. Encouraged by the apparent success of the resistance, which they believed may have halted deportations, members of the ghetto population began to construct subterranean bunkers and shelters in preparation for an uprising should the Germans attempt a final deportation of all remaining Jews in the reduced ghetto.

…..The Germans had planned to liquidate the Warsaw ghetto in three days, but the ghetto fighters held out for more than a month. Even after the end of the uprising on May 16, 1943, individual Jews hiding out in the ruins of the ghetto continued to attack the patrols of the Germans and their auxiliaries. The Warsaw ghetto uprising was the largest, symbolically most important Jewish uprising, and the first urban uprising, in German-occupied Europe. The resistance in Warsaw inspired other uprisings in ghettos (e.g., Bialystok and Minsk) and killing centers (Treblinka and Sobibor).

In other words? In other words what Dr. Carson is suggesting -- specifically that a massively armed  Jewish population could have severely hampered Hitler’s Holocaust -- is supported by the true story of the Warsaw Ghetto Uprising. In which a relatively small minority of Jews inside the ghetto, with a minimum amount of, according to the Holocaust Museum, “mostly pistols and explosives”  managed to “sufficiently disorient” the Nazis and “suspend further deportations” to the death camps, at least delaying the inevitable. Even more importantly, as word spread of the Warsaw Ghetto Uprising it “inspired other uprisings in ghettos (e.g., Bialystok and Minsk) and killing centers (Treblinka and Sobibor).”

One can only imagine the damage that could have been inflicted on Hitler’s thugs as they rose to power in the early 1930’s if the Jewish population had been as well armed as the American populace is today. Notably, the HuffPo story does reference the Warsaw Uprising, but dismisses it. An entirely wrong view if one pays attention to the authorities on the subject at the Holocaust Museum.

But this isn’t something the liberal media of the day wants to hear. They either don’t care - or worse don’t know - the history of the Warsaw Ghetto Uprising. Responding to Carson’s obviously accurate understanding of history is never even on the table.

And they think the real problem is Ben Carson?   I don’t think so.