After he was elected to the Senate from Minnesota in truly dubious fashion, former Saturday Night Live comedian and Air America Radio host Al Franken spent the next several years keeping his head down in Congress while making few appearances on cable. This was the start of Franken's earnest effort to appear a statesman and put the clown act behind him.

Then in November, Donald Trump was elected president and the ongoing left-wing meltdown began in earnest. One of the noticeable changes brought by Trump's victory is that the previously camera-shy Franken, at least as of 2008, was once again the life of the party.

Franken's latest stop on the media circuit was his appearance on HBO's Real Time with Bill Maher this past Friday. It didn't take long before Maher invoked his current fetish, that of the Supreme Court seat "stolen" by Republicans who refused to hold a hearing in 2016 for Obama nominee Merrick Garland --

MAHER: So you're going to meet with the man that Donald Trump wants to put on the Supreme Court, right?

MAHER: You're on that committee? Okay. I'm hoping that you're going to say to him, your name is not Merrick Garland so I can't vote for you. (applause from audience).

FRANKEN: Uh, I was asked by the White House counsel who, 'cause I'm on the Judiciary Committee, who I would like to see appointed and I did say Merrick Garland and, or someone like Merrick Garland who's a consensus guy. But my feeling is, we're going to have hearings. You know, I think this guy, I don't want another 5-4, conservative-activist judiciary that votes to, Citizens United ...

MAHER: Okay, but isn't it not about the qualifications but about the fact that that pick was stolen.

FRANKEN: It was (applause). I agree with you.

FRANKEN: But what are we going to do about it?

MAHER: The Democrats cannot let that stand. We cannot have two rules, one for Republicans and one for Democrats. (applause, more enthusiastic)

FRANKEN: Okay, Bill, I hear everybody applauding but just stop applauding for a second. They have the majority and we can't stop them from having hearings and so we're going to have hearings. Now what I'm saying is is that the Roberts' court has been a pro-activist, pro-corporate, pro-pollution, pro-big money in campaigns and in elections ...

Even for liberals, the forced outrage over this is a tad overwrought. If they were honest -- granted, big if -- liberals might concede that it was Democrats who were initially gung ho over denying the president a Supreme Court pick toward the end of his time in office, and they did it during both of the last two Republican administrations.

Back in June 1992, when future Vice President Joe Biden was chair of the Senate Judiciary Committee and incumbent Republican president George H.W. Bush was running for re-election, Biden said this on the Senate floor --

BIDEN: It is my view that if a Supreme Court justice resigns tomorrow or within the next several weeks, or resigns at the end of the summer, President Bush should consider following the practice of a majority of his predecessors and not -- and not -- name a nominee until after the November election is completed. The Senate, too, Mr. President, must consider how it would respond to a Supreme Court vacancy that would occur in the full throes of an election year.

It is my view that if the President goes the way of Presidents (Millard) Fillmore and (Lyndon) Johnson and presses an election-year nomination, the Senate Judiciary Committee should seriously consider not scheduling confirmation hearings on the nomination until after the political campaign season is over. ...

Some will criticize such a decision and say that it was nothing more than an attempt to save a seat on the court in hopes that a Democrat will be permitted to fill it. But that would not be our intention, Mr. President, if that were the course we were to choose as a Senate to not consider holding hearings until after the election. Instead, it would be our pragmatic conclusion that once the political season is underway, and it is, action on a Supreme Court nomination must be put off until after the election campaign is over. 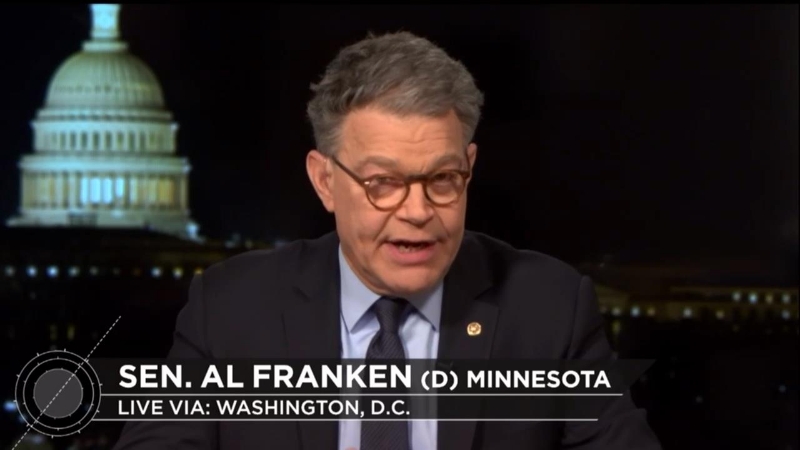 Lest anyone get the impression that Biden's views were an outlier, they were echoed more than a decade later by future Senate Minority Leader Charles Schumer in a July 2007 speech to the American Constitution Society, as another presidential campaign was gaining steam --

We should reverse the presumption of confirmation. The Supreme Court is dangerously out of balance. We cannot afford to see Justice Stevens replaced by another Roberts, or Justice Ginsburg by another Alito.

Given the track record of this president and the experience of obfuscation at the hearings, with respect to the Supreme Court, at least: I will recommend to my colleagues that we should not confirm a Supreme Court nominee except in extraordinary circumstances.

"We cannot have two rules, one for Republicans and one for Democrats," Maher complained -- but this is what Democrat party leaders such as Biden and Schumer were suggesting long before the death of Justice Antonin Scalia last winter created the current vacancy on the court. With Republicans in 2016 doing exactly what Biden and Schumer previously advised, the same rule now applies to both parties.

"Does anyone outside the MSNBC audience think that had the roles been reversed in 2016, and a Democratic Senate faced a Republican Court nominee, Harry Reid would have held a confirmation vote?" asked the Wall Street Journal in a Feb. 2 editorial headlined "The Myth of the Stolen Seat." "As John McEnroe liked to shout, 'You can't be serious!' "

Trump nominee Neil Gorsuch "is such a distinguished nominee that he ought to be confirmed 100-0," the Journal concluded, "but if Democrats try and fail to defeat him, the world should know that they are the authors of their own political frustration."